Today, December 1, marks yet another World AIDS Day. People in Africa and around the world are using the day set aside by the United Nations General Assembly to reflect on and take stock of their efforts at raising awareness and educating people about HIV/AIDS, and fighting prejudice against those who suffer from the disease.

The day is another opportunity for people worldwide to unite in the fight against HIV/AIDS.

Indeed, since the first World AIDS Day in 1988, AIDS has become one of the defining issues of our time as the fight against HIV/AIDS cannot be won by individuals alone, but through the combined efforts of all stakeholders.

This World AIDS Day is also meant to remind us of the need for the political commitment of our leaders in fighting the disease.

It calls for more national, regional and global efforts in fighting for HIV/AIDS prevention, treatment, care and support programmes.

Just like the UN Secretary General said, with strong political will, reasonable financial resources and a firm human rights-based approach, we can achieve the AIDS set targets.

There is a need to change attitudes in order to reduce the sexual transmission of HIV, eliminate new infections in children, provide treatment for 15 million people living with HIV, end stigma and discrimination, and close the AIDS funding gap.

Despite substantial progress over the three decades since AIDS was first reported, the HIV epidemic remains an unprecedented human catastrophe inflicting immense suffering on countries, communities and families throughout the world.

In fact, more children have been orphaned because of AIDS, and over 7,000 new HIV infections, we learned, occur every day, mostly among people in low- and middle-income countries.

Africa, in particular sub-Saharan Africa, remains the worst affected region, and urgent action is required at all levels to curb the devastating effects of this epidemic.

We should use the day to support people living with HIV/AIDS and re-dicated our efforts to curb the menace.

Five men charged with being in possession of suspected stolen property 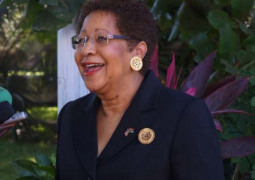