A charge of theft was recently preferred against one Bubacarr Jawo at the Brikama Magistrates' Court before Magistrate Edward Singhateh.

Bubacarr Jawo pleaded not guilty to the charge, and was granted court bail of D40,000 with two Gambian sureties who must swear to an affidavit of means and deposit their valid ID cards.

The charge sheet revealed that on 11 May 2011, at Kanilai village in Foni Kansala district of the West Coast Region, the accused person allegedly stole two cows valued at D30,000 being the property of Kanilai Family Farm.

Sgt 935 Jammeh, the prosecuting officer, objected to bail for the accused person on the grounds that he might abscond, because the accused lives close to the border.

In response, defence counsel O.B. Mbye told the court that the offence allegedly committed by the accused was a bailable offence.

He said the fact that the accused lives close to the border was not reason for him to be denied bail.

The accused was subsequently granted bail with on the above conditions. 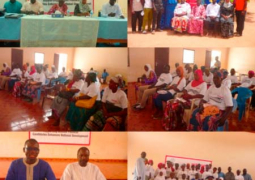