The first prosecution witness (PW1), Bakary Krubally of Kotu Quarry, recently testified in the trial involving one Omar Gomez, accused of burglary and stealing, before Magistrate I. Nahra of the Kanifing Magistrates’ Court.

Krubally told the court that he is a civil servant and also an educator at the University of The Gambia.

He recognised the accused and recalled that on 24 November 2015, he returned from a trip to Nairobi, Kenya, and was working on his report until mid-night when he started to fall asleep.

He shut down his laptop which he was working with and put it in his working bag that contains multiple flash drives and external hard drives, a couple of phones, passport, some documents, and cash of D3,500 and 17,000 CFA.

Mr Krubally added that when he woke up in the morning, he found out that the said bag was missing and searched everywhere but could not find it, because the doors and windows of his house were not broken.

He said he thought it was a coordinated theft as this was the fourth time, and he decided to report the matter to the Manjai Police Station.

CID officers sent him with two officers to his house and, at the scene, they found fingerprints and footprints on the wall, he told the court.

It was confirmed to be a theft case and they promised to take up the matter, Mr Krubally added.

According to him, two weeks later, while he was out of his house in the evening, his brother, Musa, called him and informed him that the accused person and the CID officers were in the house, and that he should go back.

He went back and found the accused sitting and asked him “are you the one who stole from my house and the accused answered in the affirmative”, with the two other persons.

The accused told him that they used a blanket which was outside by holding one edge and another holding the other edge, and one climbed into the storey building and grasped the said bag through the window and dropped it on the blanket so that it would not make a noise.

He said nothing was recovered. 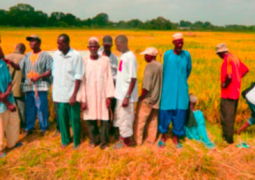