A man called Ebrima Ceesay was yesterday arraigned before Magistrate Abeke of the Kanifing Magistrates’ Court, charged with housebreaking and stealing.

He denied the charge and was granted court bail of D500,000 with two Gambian sureties who must swear to an affidavit of means and deposit their ID cards.

The particulars of offence on count one read that the accused, Ebrima Ceesay, on 19 April 2013, at Kerr Serign, in the Kanifing Municipality, broke into the house of one Musa Kijera with intent to commit a felony, to wit stealing.

Count two indicated that he stole from the said house the following: one laptop marked Acer valued at D14,175, one IPod marked point of view valued at D7,000, cash of D14,000 and one Motorola charger value unknown, being the property of the said Musa Kijera. 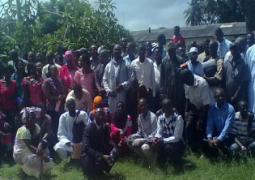