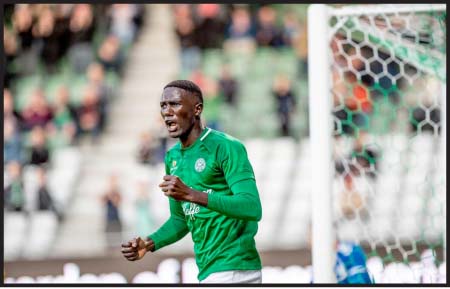 Gambian striker, Alassana Jatta has scored his third league goal for his Danish club, Viborg FF during their 5-0 home win over Fremad Amager in their week-fourteen fixtures of the Danish 1st Division (Second Division) league played at the BK Energi Viborg Arena on Friday.

The 20-year-old scored his side second goal in the 26 minutes after a fine finished just before Christian Sivebæk opener in the 13 minutes. Jeppe Gronning scored the third goal in the 30 minute, while Jeff Mensah and Frederik Brandhof extended the lead in the 65 and 90 minutes respectively.

This goal has now made it three league goals for the Gambian sensational striker after playing six league appearances.

Jatta, who wants a replicate of last season in Estonian Meistriliiga has continued his fine formin the Danish 1st Division.

Jatta and Viborg FF will next play away to Nastved, while BK Fremad Amager will play at home to Hvidovre.