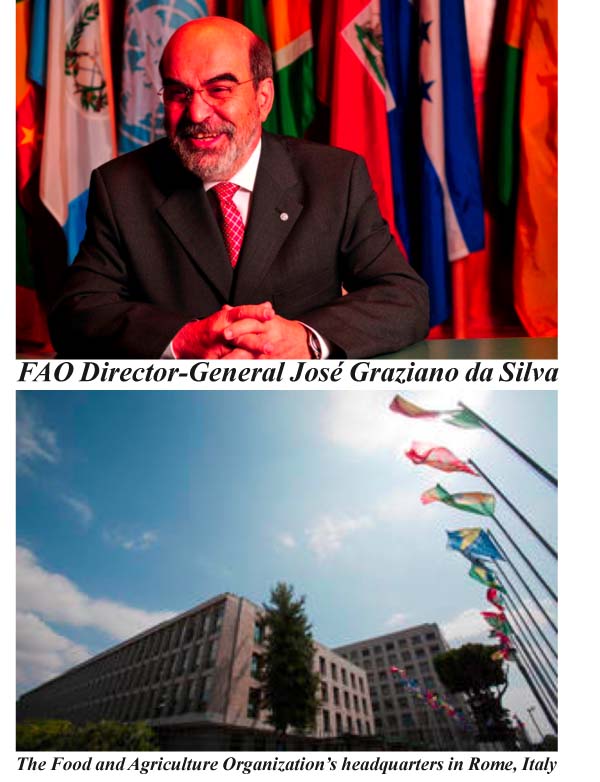 A newly released report on 25 February 2015 highlights the depth and breadth of the transformational changes taking place across the Organization. The 2014 Multilateral Organisation Performance Assessment Network (MOPAN) report finds that FAO has taken concrete measures and demonstrated strong executive leadership to instill a results-oriented culture at both the organizational and country level.

“FAO is in the process of making deep and wide-ranging reforms across the organisation, aimed at improving systems and practices which were problematic in the past and specifically to become a more transparent and result-oriented organisation”, says the report.

Since the 2011 assessment FAO “has sharpened its strategic focus” by reducing the number of strategic objectives to five and closely aligning them with its core mandate and comparative advantage, said the report.

FAO Director-General José Graziano da Silva welcomed the assessment: “FAO has gone through important transformational changes since 2012. We are starting to see the results, but our work hasn’t ended. Now is time to consolidate our previous efforts and make the necessary adjustments to deliver at our fullest potential. I am confident that in the coming years FAO can – and will – give an even greater contribution to national, regional and global efforts to ensure food and nutrition security for all and promote sustainable development.”

The reporting period of the 2014 assessment covers most of the first term in office of Graziano da Silva, who took up office in January 2012. In a striking turnaround from the 2011 report, the most recent review of the MOPAN network of 19 donor countries rated FAO “strong or above” in more than half the areas assessed and inadequate in none.

The MOPAN report noted that many of the efforts are still ongoing and should be considered as work-in-progress,” particularly mainstreaming the new results orientation across all aspects of the Organization’s work.

The 2014 MOPAN assessment finds that FAO is “a relevant organization that has an important contribution to make to improve global, regional and country level food security and agricultural systems.”

It also notes how, over the past three years, FAO “has undertaken organisational reforms for more effective management and operations in order to implement its reviewed Strategic Framework”.

The assessment also found that FAO has strengthened its collaboration with other UN agencies and stakeholders to more effectively address global, regional and country-level issues, as well as emergency situations. It considered the Organization´s efforts to work with sister UN agencies as “commendable”.

FAO’s efforts to “work more strategically in countries and its decentralization efforts are fundamental to improving the relevance and effectiveness of its programming,” the MOPAN report said.

The MOPAN report notes how FAO “has a reputation for high quality and valued policy dialogue, particularly at the global and regional levels,” and how it is “acknowledged for its inclusive approach.”

FAO, the report added, is “a champion” of South-South dialogue and co-operation - the mutual sharing and exchange of knowledge, experiences, good practices and other resources among countries in the global South.

Active since 2002, MOPAN is a network of 19 donor countries with a common interest in assessing the organisational effectiveness of multilateral organisations and their measurement and reporting on development and/or humanitarian results. The Members of MOPAN are: Australia, Austria, Belgium, Canada, Denmark, Finland, France, Germany, Ireland, Japan, Luxembourg, The Netherlands, Norway, Republic of Korea, Spain, Sweden, Switzerland, the United Kingdom and the United States of America.