The Gambia Committee on Traditional Practices affecting the Health of Women and Children (Gamcotrap), a local women rights NGO yesterday joined the global campaign, known as ‘One billion rising to end violence against women.’

The event in The Gambia, which was characterised by a march-past, led by the scout band, from traffic light junction in Fajara to TANGO premises in Kanifing, saw participants dancing and chanting slogans, saying “end violence against women.”

According to Omar Dibba, youth programme coordinator of Gamcotrap, the one billion rising campaign violence against women is a global call to action, based on the staggering statistic that 1 in 3 women on the planet is beaten or raped during her lifetime.

He said “This year is 15 anniversary of V-Day and Gamcotrap has joined activists, writers, thinkers, celebrities and women and men to express their outrages, demand change, strike, dance and rise in defiance of the injustices women suffered, demanding an end at last to violence against women.”

Gamcotrap is a leading women’s rights organisation in The Gambia that works on the sexual and reproduction health and rights of women and girls, who cannot be left behind in this global movement.

This is a part of the many reasons that the organisation is proud to be associated with V-DAY, who are celebrating 15 years of existence in the fight against violence against women and girls, he said.

“Young people, this day belong to you, it is your day and moment to say no to violence in all its forms; it is your moment to champion the global fight and honour the lives of women and girls”, he added.

For her part, Ms. Musukuta Badjie, who is the Programme Officer of CPA, said Article 19 of the CRC defines violence as all forms of physical or mental violence, injury and abuse, neglect or negligent treatment, maltreatment or exploitation, including sexual abuse.

She noted that the most extreme forms of violence against children include sexual exploitation and child trafficking, FGM, worst forms of child labour and impact of armed conflict.

According to her, these are happening on a daily basis where children are exposed to physical, sexual and physiological violence in homes, schools and institutions, among others.

Mr. Siaka K Dibba, a youth activist, revealed that men have crucial role to play as fathers, brothers, husbands, friends, decision-makers, community and opinion leaders in speaking and preaching about violence against women and girls, to ensure that priority attention is given to the issue.

Mr. Madi Jobarteh of TANGO dilated on the importance of dialogue. As he stated, it is not violence, but putting human dignity first. 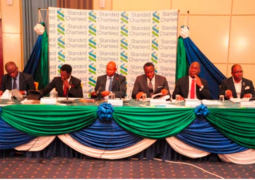