"All men are like grass, and all their glory is like the flowers of the field; the grass withers and the flowers fall, but the word of the Lord stands forever."   1 Peter 1:24-25   Article 302

The rescue hunt was going to continue and this time our Lord Jesus was out to get Simon Peter, the ring leader, and his group. They had set off to the Sea of Galilee, or the at Peter's invitation to go fishing. Somehow they had forgotten, with the turn of events, that they had been called to be "fishers of men." (Matthew 4:19)

To put things in context, the events of the crucifixion had been devastating for Jesus' disciples. True, they had been with Him for three and a half years. They had seen, heard and learnt a lot from |Him. But with the demise of their young leader just thirty years old, everything looked like a bad dream. Their world had turned upside down. When such happens we return to familiar territory to heal the wounds; where with the benefit of time both the pain and the emotional trauma will slide into oblivion as forgiveness takes over. But was that the case really?

The Simon Peter group however had summed up courage to go fishing. Unfortunately, they were no longer the skilful fishermen they must have thought they were, because they fished all night and caught nothing. Early that morning someone appeared on the shore asking whether they had something to eat. The reply had come sharply but emphatically, as no! It was then that the Lord instructed them; "Throw your net on the right side of the boat and you will find some." (John 21:6) They executed and the catch was miraculous, they could not event haul it aboard. So great was the catch. At that very minute without hesitation Simon |Peter exclaimed; "It is the Lord!" He jumped into the water and headed straight for Jesus.

Experience is one of our greatest teachers if only we stop to look and listen. Something is striking and similar about this scene in Peter's memory. He recalled his very first encounter with the Lord. Our Lord Jesus had used Peter's boat to teach the crowd that had followed |Him. Soon after, He had asked Peter to "Put into the deep water, and let down the nets for a catch." Simon had answered; "Master we've worked hard all night and haven't caught anything. But because you say so, I will let down the nets." (Luke 5:4-5)  "They had caught a large number of fish that their nets begin to break." (Luke 5:6)

Incidents like these mark us for a lifetime. No doubt this must have been a profound recall from Peter's memory when he had this unique encounter with Jesus. Marvelled by Jesus' power over nature he had to conclude; "It is the Lord!

It is easy to recognise people by their trade marks and our Lord's miracle was again a direct message that he was alive and affecting the world around Him - showing His supremacy over nature. They were so struck by His presence that nobody dared ask Him who He was. They were not bold enough to seek confirmation. Our Lord was going to lift any doubt however when he started breaking the bread and giving thanks in His peculiar style.

Like a lost object that was recovered intact, it was necessary to have them rooted once again, reoriented, reminded of their major goal and purpose - of saving souls. The time our Lord was going to take to do this would take the form of questions and answers. It was necessary and important for them not to repeat such behaviour again. Peter the head disciple would have to make a solemn commitment that would prevent them from ever rushing off to take refuge in their past.

The charge had been given; henceforth a different trait will emerge in Simon Peter. |He had failed our Lord when he denied ever knowing Him when his life was threatened.(John 18:17) He had gone off fishing when he should have as the most senior disciple assembled the others in order to boost their morale.

That would now be a thing of the past, besides all was not lost. The Lord had come to rescue him for good. There would be no turning back this time around. In Peter's spirit Jesus was alive and nothing would stop him from spreading this good news around the world.

Some other person would have abandoned Simon Peter based on his lamentable performance in the face of trouble. We are quick to write off, to lay off and to condemn. But God knows our human frailties, most of all He knows our hearts.

Simon Peter was retrieved from the rubble and given a second chance all for God's glory. 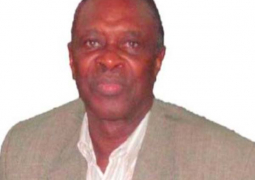