Reliable sources have informed Pointsports that the senior National team, Scorpions, who were to leave yesterday for Mauritania for the second leg of the first ever home-based African cup of Nations 2009 qualifiers, were delayed.

The Gambia Football Association when contacted on the issue, Seedy M.B. Kinteh, President of the Association revealed that the team could not leave yesterday as plan because they were waiting for their tickets.

He said now that they've gotten them, the team will leave today for Mauritania via Senegal.

He seized the opportunity to commend Africell for coming to the aid of the team. "They have sponsored the team in their preparations to go to Nouakchott," he explained.

The Scorpions are expected to play Mauritania on Saturday the 12thof April 2008.

It will be recalled that the Scorpions drew 1-1 with Mauritania in Banjul on Saturday march 29th2008 at the Independence Stadium in Bakau after a tough fight. 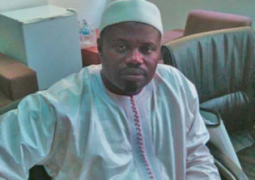 We are not doing justice to Gambian people: Kombo Central NAM