Without doubt the idea of unifying the continent politically, economically and socially by bringing it together culturally and economically is one of the most important dreams which enthralled the imagination of Africans for many generations.

It was given serious thought by the founding fathers of the African liberation movement such as Nkrumah, Sekou Ture, Gamal Abdel Nasser, Kenneth Kaunda, Patrice Lumumba and of recent, the Libyan leader Muammar Gaddafi.

What owns of natural wealth and capacities make it at least the first or second power in the globe. Its own raw materials and the resources enable it to potentially establish a giant federal economy capable of competing the largest economies of the world. In any language represents a massive economic weight which can make all Africans rich people, needless of external relief as much as they are in need of extracting their natural land wealth.

today is devoting all its energies and accelerating all its efforts for a bright and shining future through the umbrella of the Great African Union.

Let us work together for a united capable of creating its own destiny and talking with one resounding voice that will make the whole world tremble. The establishment of a federal government will shift Africans from the union position, to a group of states whose interests coincide and melt into one giant entity.

needs to widen its steps, and complete the construction of its project, for we are in an era when events develop at a drastic pace.

The of today is not the of the past. It is not the or the exploited continent as portrayed by others. today is shining and radiating brightness. It is a solid and strong continent whose people are the mainstay of its power and wealth. Therefore, to a large extent the issue of integrating the continent must be taken seriously as unity is strength.

We urge that as Africans we also stop killing each other and bring to end all wars in the continent for the sake of our people.

"Things are where things are, and as fate has willed. So they shall be fulfilled." 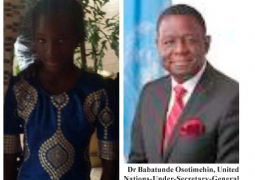