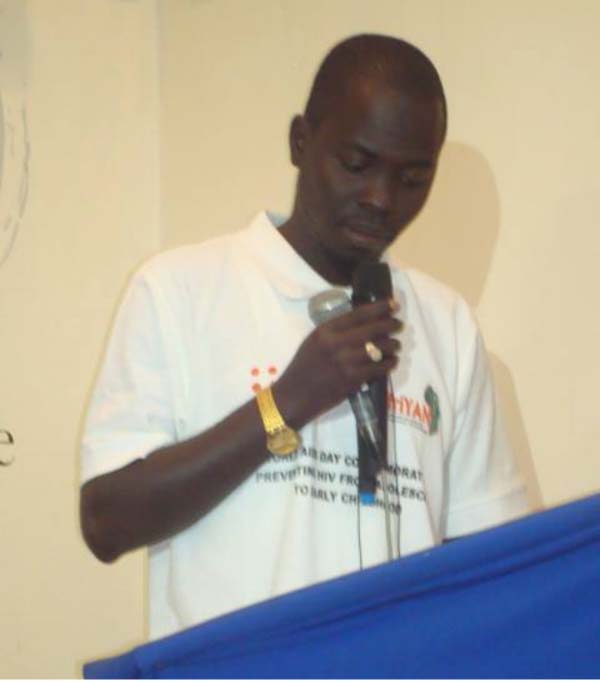 The Africa Youth and Adolescence Network on Population and Development The Gambia (AFRiYAN) recently held a symposium on the commemoration of World Aids day annually observed on 1 December globally by member states.

This year’s occasion, funded by the UNFPA and mainly focused on youth attitudinal change, began with a march-past which started from Pipe Line junction to the Alliance Franco office, on the theme: “Preventing HIV from Adolescent to early childhood”

The occasion was attended by members of the association, government officials and other dignitaries.

Speaking at the celebration, the Kanifing Municipality coordinator, Kawsu Fatty, said the day was first conceptualized in August 1979 and member states began the observation in 1988.

Focusing on HIV/AIDS, he said the menace is mainly affecting young people, which is why it was deemed necessary at their network level to call on young people to celebrate the day to reflect back on the lives that have been lost through HIV/AIDS.

In his review, the chairman of the Network of Adolescents and Youth on Population and Development (NAYPOD), Lamin Marong, said NAYPOD is a network working on SRH, adolescents and population and development, adding that it has brought about sustained attitudinal and behavioral change among young people in The Gambia through provision of information on advocacy and training and the strengthening of networking and collaboration.

He added that in the context of the global quest for sustainable development, the commemoration came at a time the population is increasing daily, saying it is incumbent upon all Gambians to prevent HIV from adolescence to early childhood.

The International Conference on Population and Development (ICPD) held in Cairo in September 1994 stressed the significance of the role of youth in setting and following up on the objectives and goals of the ICPD and the MDGs, he said.

He emphasised intensifying their role in the national actions for development, the eradication of poverty, gender equity, and the reinforcement of means of action of young people including adolescents in the setting up of local framework of family planning, sexual health and the fight against HIV/AIDS.

“I wish to see Gambian young people leading a joyful sexual and reproductive life,” he said, adding that the awareness on the requirement and the urgency to create an authority will allow the young people networking to gather their ideas, their means and their knowledge to establish and implement strategies suitable to induce a change of behaviour favorable to the reduction of HIV and AIDS.

He also calls for open and active discussion of problems relating to development and the fight against poverty and gender inequity and inequality.

He further calls on all and sundry to go for VCT test, saying HIV/AIDS is increasing daily and everyone should know their status.He thanked the UNFPA for the funding support and the participants