The first period was dominated and controlled by Real De Banjul, and they launched a series of assaults in front of Africell's goal-mouth, but all their attempts were denied by Africell's solid defence line, and the first period failed to produce a goal.

Upon resumption of the game, Real de Banjul established their supremacy over Africell, and created numerous goal-scoring opportunities, but squandered all.

Africell, who were struggling during their past two games, dominated the game and created golden scoring opportunities.

Their efforts paid dividend in the 72nd minute of the game, when mid-fielder Sainey Sambou netted their lone goal from a brilliant strike, and earned his side their first win in the season.

The Gambia Ports Authority climbed to the 2nd spot on the league standings, with a hard fought 3-2 win over telecommunications giants Gamtel at the rejuvenated Banjul Mini Stadium on the same day.

Abdou Njie gave the Gambia Ports Authority the lead in the 13th minute of the game, from a penalty spot, when defender Dodou Suso brought down Hamza Barry inside Gamtel FC's eighteen-yard box.

Malamin Singhateh levelled the score line for Gamtel FC in the 21st minute of the game, from a classic finisher, but was immediately substituted out due to an injury he sustained on his left leg, when he collided with goalkeeper Ousman Cham in the process of trying to score the goal.

Assan Ceesay made a brilliant move in the 29th minute of the game, and slotted a fine shot, but the left stand bar denied his effort. A minute later, Ali Sowe also struck the right stand bar with a superb shot.

Ousman Manneh, who was substituted in to replace injured Malamin Singhateh, wasted no time to register his name on the score sheet for Gamtel FC, as he made it 2-1 for the telecommunications giants, just 20 minutes after his introduction, from a sensible header after capitalising on Dodou Suso's corner kick.

Abdou Njie made a superb free kick in the 45th minute of the game, but his effort struck the right stand bar and hits goalkeeper Christopher Allan, and went for a corner kick.

The Gambia Ports Authority, under the leadership of head coach Peter Bonu Johnson, came from 2-1 down after the break to level the score line 2-2, through Hamza Barry, who was man of the match, in the 63rd minute of the game, from a wonderful shot.

Substitute Ousman Saho had a clear chance to register his name on the score sheet for the Ferry Boys, in the 71st minute of the game, but his shot went over the cross bar for a goal kick to Gamtel FC.

Striker Sam Gibba sealed the victory for the Gambia Ports Authority in the 93rd minute of the game from a brilliant finish after capitalising on Ousman Saho’s free kick.

Brikama United dropped to 3rd position in the league table after their goalless draw with Armed Forces in the other week three game played at the Serrekunda West Mini Stadium.

Brikama United collected 5 points in three games, while Armed Forces are 4th position with 4 points in two games, with a game in hand. 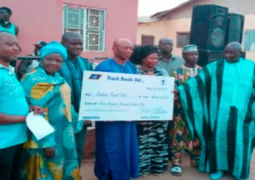