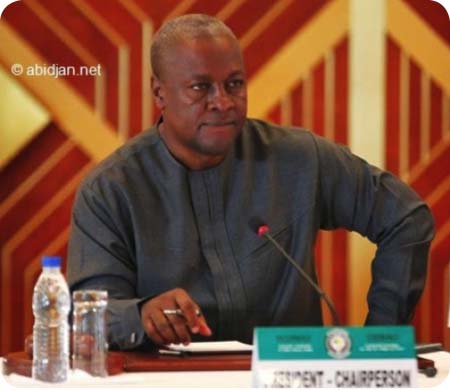 He said the spread of the virus in the sub-region “must remind us of the fierce urgency to develop regional solutions to our common social problems.”

He was speaking at a conference of West African ministers of Health in Accra, Ghana, this week, among them the Gambian minister of Health, Dr. Omar Sey.

President Mahama in his keynote speech called on African leaders not to rest until the Ebola disease “is defeated.”

The outbreak of the disease has stigmatized not only the four affected countries, Guinea, Liberia, Sierra Leone and Nigeria, but the continent as a whole, Mahama said.

The virus disease outbreak is affecting the socio-economic development of the continent, President Mahama added, further mentioning that nations in Africa that largely depend on tourism are suffering from “cancellation of visits,” while economic activities across the sub-region have been affected also.

The ECOWAS chairman acknowledged that the disease requires full attention and an urgent response.

ECOWAS “will do everything to defeat the disease,” Mahama declared.

The President of Ghana recalled that ECOWAS heads of states made financial commitments to fight the deadly disease, and further commended the international community for the “positive response” towards the fight against Ebola.

He expressed his appreciation to international organizations including WHO, the UN, World Bank and African Development Bank (ADB) for their “significant pledge of resources.”

ECOWAS Commission President Kadre Ouedraogo in a statement called on the International community to make more donations to support the West African sub-region in fighting the Ebola virus disease outbreak.

He appealed to the international community not to “ostracize” West Africans at this trying period.