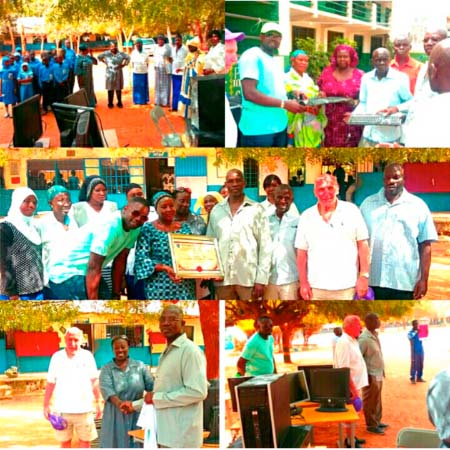 Action Gambia is an NGO based in Norway that works with different projects in The Gambia to help in the improvement of the schools in the country.

Action Gambia aims to assist various projects and relevant organisations in The Gambia.

Yafatou Mbye Jaba, deputy head-teacher of Muhammedan Lower Basic School and the headmistress of Bakau Newtown, both expressed their gratitude to Action Gambia for coming to their aid, saying it was timely.

‘’They have been helping us for many years; helping us in our renovation of our toilets for both the students and staff. This has been going on for years,’’ they said.

Abdoulie Jagne and Samba Njie, members of Action Gambia, said they have always felt the need to support their country in any way they can.

Momodou Jobarteh, pioneering member of Action Gambia, said it was duty bound on them as good citizens to come back and help in the building of their country, saying this was a token of all their appreciation to the country that made them who they are today.

‘’We have been helping these schools for the past years. This year, we brought chairs, computers, tables, books and pencils,” Mr Jobarteh said.

Action Gambia has been actively participating in charitable work, and helping projects aimed at nation-building.

Last year, Action Gambia was in the country to help schools and cooperated with communities such the Banjul City Council to help in projects to fight against malaria in the capital city.