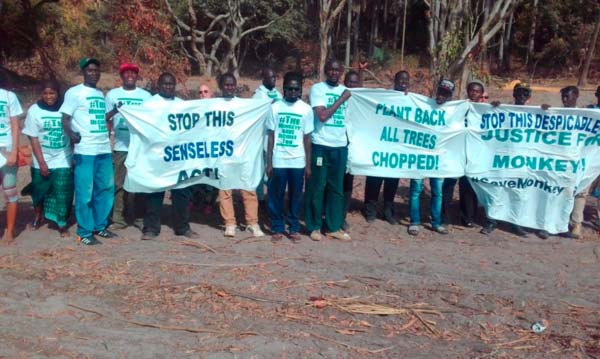 A massive protest against the government’s unlawful annihilation of the Bijilo Ecotourism Park was staged on 10 March 2017.

Attended by over one hundred young environmentalists, tourism workers and tourists, the protest took the form of a march-past from the park to the main Senegambia junction, where the protesters chanted slogans like ‘Save the Nature, the Monkeys Have Decided Too’.

Jointly organised by Climate Watch-The Gambia and Green Up, the demonstration was aimed at denouncing the government’s unlawful demolition of the monkey park and demanding for the perpetrators to immediately stop the surveying and levelling it is carrying out and immediately commence restoring the chopped trees.

“The government’s devastation in the gazetted park is in gross violation of the National Environmental Management Act, Coastal Zone Management Guidelines and Environmental Impact Assessment Regulations respectively,” they said.

The damaged site is an ecologically sensitive area that houses monkeys, retiles and indigenous tree species with many other wild floras that are unique to the ecosystem.

Earlier on, the ministries of tourism and environment held a joint press conference where Tourism Minister Hamat Bah admitted that the destruction of the park is unlawful; but however added that the construction process will continue. He said the place was allocated to Kuwaitis, Qataris and Saudis by the former government to construct hotels and resorts totaling 13 hectares of the Bijilo Forest Park.

Speaking to the journalists after the protest, Kemo Fatty, the Director of Green-Up tree planting initiative, said they are demanding genuine answers from the government as to the truth behind the allocation and demolition of the park. He said they will not relent in standing for environmental justice as the inhabitants in the park have a right to life. “We want the government revive the lost forest park. Afforestation process should start soon because we will not allow any construction activity to take place in the park as it is a legally protected area,” he maintained.

The Executive Director of Climate Watch - The Gambia, Saikou Suwareh Jabai, said they will not settle for anything less than an immediate cessation of the so-called construction process and subsequently start restoring the gazetted park.

Jabai, who doubles as the Green-Up coordinator, said the “unlawful demolition” of the ecotourism park is an indication of the tourism ministry’s recklessness to the lives of the monkeys, reptiles and birds “more despondently a total disregard” to the environmental laws.

The programme manager of Climate Watch, Omar Malmo Sambou, said the government violates the National Environmental Management Act thus the perpetrators should be brought to book if they decide to continue the construction process as the tourism minister proposed.

He said it is disheartening to see “the government, who should be the primary protector of the environmental laws, violating it”.

The park manager, Sulayman Jobe, expressed similar frustrations, calling on the authorities to restore the park as it attracts tourists and earns income for the government.

Speakers on the occasion included tourists, birdwatchers, tourist taxi drivers, and other stakeholders who have already started feeling the impact of this unlawful annihilation.