The criminal trial for abuse of office against Omar Faye, the alkalo of Busura village in Kombo Central district of the West Coast Region continued on Tuesday at the Brikama Magistrates’ Court with the testimony of a prosecution witness.

In his testimony before Magistrate Baboucarr Secka, the witness, Sanusey Minteh, told the court that he lives at Marakisa village and could recall what happened in 2006, when he was working at the Brikama Area Council.

He said, one day, while he was on his way to the Brikama market, he met with one Boy Njie, who informed him that Burama Jatta and Bakary Jatta were both at the Brikama Police Station.

According to him, upon receiving that information, he also informed one Dembo Jarju about the arrest of Burama and Bakary, adding that both of them later went to the police station.

“At the police station, the police told me that Burama Jatta and Bakary Jatta were brought there by one Alieu Jarju, who said he suspected that Burama and Bakary went to his plot of land and cut all the cashew trees, that he had planted,” he added.

Dembo Jarju, the witness continued, appealed to the police to withdraw the matter from the station to  be addressed at the village level, because they are all related, and that the police accepted Dembo’s appeal.

“We left the police station, and Dembo Jarju informed Abdou FM Badjie, who was the then assistant Governor in the North Bank Region, and Abdou Badjie also informed the alkalos and the elders of the four villages Busura, Marakisa, Jalanbang and Seyone to meet at the said piece of land,” he added.

Still testifying, the witness further told the court that, after the meeting, he (the witness) went to Darsilami, where he met with the accused person, who told him that he wanted to see him at his home.

“I went to Busura to meet the accused in his compound, and he told me that he needed my assistance concerning the land issue,” the witness stated. He said the accused told him that though the land was confirmed to be that of Marakissa village, there was a portion where he (the accused) built a house.

He said the accused told him that if that portion goes to Marakissa, he would lose it and  that he wanted him (the witness) to go and appeal to the land owners so that they could leave that potion for him.

He identified the said letter in court, which was admitted and tendered as an exhibit.

The case was adjourned till 6th January 2011, for continuation 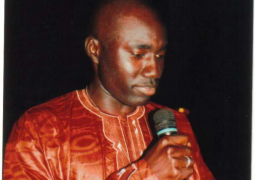