One Lamin Jabang was Wednesday arraigned before Magistrate Jaiteh of the Brikama Magistrates’ Court, on three counts of breaking, stealing and assault.

Count one stated that Lamin Jabang on 10 August 2015, at Sanyang village in the West Coast Region, broke and entered into the house of one Nuha Camara with intent to commit a felony.

Count two stated that Lamin Jabang on the same date and place, stole the following items: Samsung phone valued at D500 and an I-Phone S12 valued at D1,300.

Count three stated that Lamin Jabang on the same date, place and time, willfully and unlawfully assaulted the complainant by stabbing him with a pair of scissors, causing him actual bodily harm.

The accused pleaded guilty as charged on all counts, but denied using a pair of scissors to stab the complainant.

The statement of facts narrated by the prosecutor revealed that it happened on 10 August 2015, when the complainant was sleeping and was woken by a strange noise.

Upon finding out what was happening, he saw the accused person had already taken the said items.

He was chased and caught by the neighbours, and later taken to the Sanyang Police Station, where his statement was taken.

The said items (two mobile phones), a medical certificate and a photograph of the injuries were tendered in evidence and marked as exhibits. 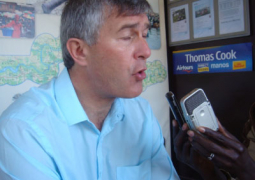