Tanji native Muhammed Jammeh, who has recently built four pedestrian bridges for the community of , is seeking support from the Government of The Gambia and individuals to do more.

Mr Jammeh, who spoke to this reporter recently about his good initiative, said he wants to continue to help communities in Ebo Town, Sukuta, Nema Alkali Kunda, Nema Jola Kunda and other places that are having road and passage problems in the wake of the raining season.

Mr Jammeh, who was supported by 14 boys during his construction of the four pedestrian bridges in , added that he did not pay those boys; he only motivated them to give him a helping hand.

A resident of Abuko village, Jammeh said he decided to render such a help to those communities not to derive money from it but to attract Allah’s reward and blessings.

He has been seeking the support of the Kanifing Municipal Council and Forestry since last year, yet he could not receive any positive response from them, he said.

“The President of the even went up to the pedestrian bridge I made last year,” he said, while appealing to everyone for support.

He also took time to send special thanks to his mother who gave him part of the money he is using to buy materials for the construction of the pedestrian bridges. 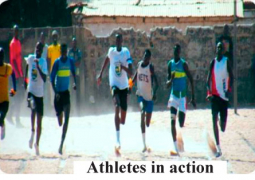