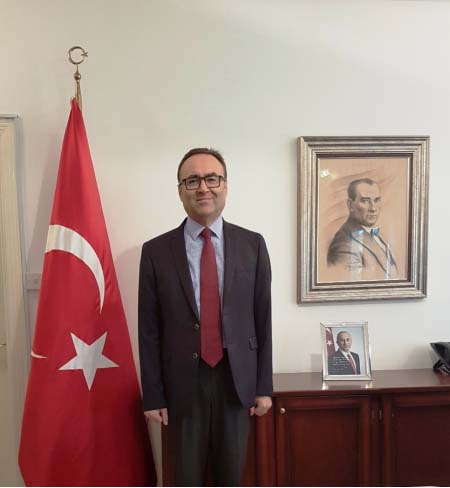 On the Occasion of the 1st Anniversary of the July 15th, 2016 FETO Coup Attempt

The preceding year, 2016, along with all its expected and unexpected turn of events throughout the world would be registered as quite a decisive period in the history of both The Republic of The Gambia and Turkey. The Turkish people’s strong determination for the avowal of the most cherished democracy, manifested by their heroic resistance and defeat of the Fetullah Terrorist Organization (FETO) on the 15TH of July, 2016 was echoed in another, but very valiant manner by the Gambian people’s overwhelming political will on December 1st presidential elections to usher in democracy in the country.

Drawing this parallelism between two nations with different experiences in democracy, now I would like to dwell on the Turkish people’s ordeal on the night of July 15th 2016. This year, on the 15th of July, we will commemorate the first anniversary of the foiled coup attempt. It is almost beyond my comprehension to describe the brutality and treachery that the putschist displayed that night. As a matter of fact, the Turkish people lived through one of the most catastrophic experiences in the country’s history on the night of July 15th, 2016.

It was most certainly the greatest and the most dangerous attempt of occupation in the modern history of Turkey. Just to remind the distinguished readers, the Turkish people have a tradition of uninterrupted statehood and sovereignty for more than 1000 years.

The Fetullah Terrorist Organization, aiming to overthrow the democratically elected government, together with the President and the constitutional order in Turkey on this date, by mobilizing its accomplices who infiltrated the military, as well as their terrorist disciples in the civilian bureaucracy, opened fire on the civilian people, murdered those democracy defenders on the streets who stood in front of the tank pallets, attacked the Presidential Compound and bombed the Turkish Grand National Assembly.

They also attempted to assassinate the President and the Prime Minister. In this turmoil, around 249 citizens lost their lives and more than 2000 were wounded.

However, an across the board call of the Turkish President to keep democracy vigil found a strong repercussion on the part of the Turkish people and was very decisive in foiling the coup attempt. The Turkish people with the guidance of the President of the Republic of Turkey, H.E. Recep Tayip Erdogan and the government took to the streets and won one of the most significant victories of democracy in the world history.

Even on the night of 15th July, it was obvious that Fetullah Gulen and his disciples were behind this treacherous and bloody coup attempt. His desire to take control of the Turkish State and to establish a regime based on his perverted religious ethos was not a secret in Turkey. For decades, he directed his followers to infiltrate all critical state organs, such as the police, the judiciary and the armed forces.

During the operations held within the scope of the investigations initiated, following the ominous attempted coup, most of the suspects and culprits were rounded up by the Turkish Security Forces and brought before the Independent Turkish Courts. Now after a year of extensive administrative, criminal and judicial investigations, we have a better grasp of what happened on July 15 and the perpetrator that was behind it. There are 78 ongoing court cases in 23 different provinces with regard to the perpetrators.

Moreover, there are testimonies from thousands of officers and NCOs confessing their affiliation with FETO, video recordings and communications between the putschists, etc.

Throughout the process, all political parties, the members of the Turkish Grand National Assembly (TGNA) and civil society unions  non governmental organizations and the media stood firmly by the values of democracy, democratic institutions and the constitution. A joint declaration in defense of democracy was issued during the extraordinary meeting of the general assembly of the TGNA on the 16th of July, 2016. Furthermore, in view of the heroic resistance of the Turkish people to Fetullah Terrorist Organization, the 15th of July has been declared by the government as Democracy and National Unity Day in the country.

In light of the grave menace and security risks, the Turkish Government rightfully takes necessary and proportionate measures to suppress and eventually defeat this imminent threat.

The state of emergency, which was declared immediately after the foiled terrorist coup attempt and extended until mid July 2017 in full conformity with our national legislation and international obligations, was necessary to make the state organs act swiftly and effectively. It is not intended to intervene with the daily lives of the Turkish citizens. Our fight with FETO is based on three principles that they despise most: rule of law, morality and democracy.

The Turkish government in parallel with its fight with FETO as well as all sorts of terrorism at home is committed to further strengthen the bases of democracy in Turkey, because we know that this is the only way to counter terrorism in all forms and manifestations. We are determined to fight such enemies of democracy through democracy. Hence, The Turkish people and the government, having paid a dear price for the sublime values of democracy, now legitimately expect the cooperation of the international community and our allies with regard to the extradition of the FETO criminals.

The FETO is not a benign civic education movement as some circles try hard to portray. It would be a huge mischaracterization to think of Guuen merely as a peaceful Islamic scholar and preacher. His disciples in the armed forces waged a campaign of terror on the night of July 15 and Gulen’s role in it deserves everyone’s attention.

Seizing this opportunity, I would like to thank once more the Gambian government and the brotherly Gambian people for the solidarity shown and support extended to the Turkish government and Turkish people throughout this period. As a matter of fact, The Gambia was the first country to close down the FETO School in 2014 in the African continent.

To conclude, FETO, as a global security threat, is still lingering around with its global network in more than 150 countries through schools, NGOs, lobbyists, media outlets and companies. Therefore, I strongly call upon all the policy makers and the security institutions throughout the world to deal with this menace seriously.