Abdoulie Ceesay, Ousman Trawally, Foday Camara, Ousman Camara, Isagha Kondeh and Abubacarr Jawara, all Guinean nationals, were charged with conspiracy to commit a felony, making or having in possession papers or implements for forgery, and attempting to commit a misdemeanour.

The court also ordered them to be deported upon completion of their prison terms.

The third convict, Foday Camara, who pleaded guilty to counts one and two was also convicted and sentenced on count one to twelve months in prison and two years in prison on count two. Both sentences were to run consecutively with hard labour. He was also ordered to be deported upon completion of his sentence.

The 4th, 5th and 6th accused persons, who all pleaded not guilty to count one and two were remanded in custody, pending the adjourned date.

According to the charge sheet, on count one, on 15 January 2011 at around

Kairaba Avenue
and diverse places in the , the accused persons conspired amongst themselves with others to commit a felony to wit making fake currency notes.

The charge sheet on count two stated that the accused persons jointly made or had in possession two bundles of several papers cut into currency size for the purpose of forging same to forge currency notes.

While count three read that the 1st and 2nd accused persons, on 21st January 2011 along Kairaba Avenue in the Kanifing Municipality, cajoled one Sainey Njie into money doubling by presenting a D25 note which they said could be doubled for him.

What next for the Scorpions? 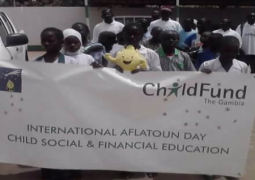