Fatou Manneh, Edrisa Camara, Ebrima Bah and Aminata Loum were recently convicted and sentenced to a fine of D4,500 in default to serve 8 months in prison each with hard labour by Magistrate Bojang at the Brikama Magistrates’ Court for using banned plastic bags.

Delivering the judgment, Magistrate Bojang told the court that all the accused persons appeared before the court and they were unlawfully found with banned plastic bags.

The charge was read to the accused persons in the local language they both understood and pleaded guilty, he said, adding that the accused persons begged the court to temper justice with mercy, as they are the breadwinners of their families and also regretted the offence they had committed.

He said the court would consider the mitigation pleas of the accused persons, but the offence they committed was a very serious offence because the Gambia government had banned the use of plastic bags in the country.

He added that the accused persons were aware of it and still they continued using the plastic bags, and had broken the law.

He consequently sentenced them accordingly. 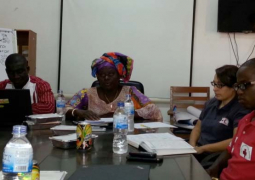