The graduation ceremony was held on 8 July 2013 at the Fajara Barracks football grounds with ROC ambassador and GAF top command’s representatives in attendance.

Speaking at the ceremony, H.E. Samuel Chen, Ambassador of the Republic of China (Taiwan), said that the special training highlighted the exaltation of the morale of the Gambia Armed Forces, adding: “Guard of Honor is a vital symbol of the armed forces in high spirits.”

“We are fully aware that The Gambia Armed Forces has been trained very well” but we believe that  GAF might have found the Guard of Honor training useful for them to become even better,” he said.

Guard of Honor is also an indicator of the army, he went on, adding that it indicates the spirit of loyalty and valor in the soldiers’ soul.

“The Gambia Armed Forces, through neat and uniform movement, demonstrates that it is a well-trained force to defend the peace for the people and the country, even for regional stability,” he said.

“Today, I have the honour to present the 3 training instructors from Taiwan. They are selected in particular from the Ministry of Defence of the Republic of China (Taiwan). They are respectively, Instructor Kong, Instructor Lin and Instructor Yeh. They are young, strong, tall and most importantly, they are well-experienced. They have all trained more than ten Guards of Honor both at home and abroad. Some of those trained Guards have participated in international competitions,” he said.

“I have the confidence that the 3 instructors along with Col. Wally, the Military Attaché of the Embassy, will be able to train an excellent Guard of Honor of The Gambia. After 8 weeks training, you will see that the performance of the 30 members of GAF Guard of Honor must be amazing,” he said.

He remarked that based on the friendship between the countries, the Republic of China (Taiwan) will always be with The Gambia to help develop the country.

Ambassador Chen added that he was very glad to congratulate them for the successful training result as well as for the formation of a new Special Task Team in GAF.

“Guard of Honor is a symbolic force in the Armed Forces. It highlights soldiers’ loyalty and valor, also the demonstration of military majesty. Guard of Honor’s mission is not for fighting or striking, but can upgrade the level of armed forces and cheer up soldiers’ morale,” Ambassador Chan said.

According to him, the occasion is not the real end of the training, but should serve as the beginning of a new mission for participants.

“The 3 instructors from Taiwan have laid a very solid foundation; I believe that GAF can definitely continue to practise. If that’s so, I expect that the instructors will be able to come again early next year to train for more complicated movement. It means that the Guard of Honor can be upgraded in the future,” he added.

Lieutenant General Comdor Madani Senghore, Commander of Navy who represented the Chief of Defence Staff at the occasion, began by thanking the Almighty Allah for yet another milestone in the history of the Gambia Armed Forces.

He stated that the military cooperation between the Republic of China (Taiwan) and The Gambia can be traced back to 1995 following the resumption of diplomatic and political ties between the two nations.

He said that since then GAF has immensely been benefiting from ROC on Taiwan through such areas as training, equipment, materials, and infrastructural development.

Guard of Honor is a very important military function usually accorded to high-profile dignitaries as a sign of respect, he remarked.

The just-concluded training would go a long way in perfecting the skills of The Gambia’s men and women in uniform in the execution of “this very important task”.

“This highly trained Guard of Honor batch is the first group to be trained locally by ROC; these fine men and women were drawn from all the three services of GAF,” he said.

Senghore added: “In line with our Commander-In-Chief’s intent for a well trained and highly disciplined professional force, continuity in the provision of required training to commensurate with our responsibilities will be given utmost priority.”

This batch will eventually become trainers for subsequent batches with support from the ROC, he said, whilst thanking the trainers for their sacrifice during the 8 weeks of intensive training and congratulating the graduands on their successful completion of the course.

He urged them to maintain their physical fitness and share their invaluable knowledge with those who could not take part in the training.

“I am happy to acknowledge that the cooperation is an ongoing one that continues to go from strength to strength. As stated earlier your country’s intervention is not limited to capacity building but includes infrastructural development,” he said.

“Currently, a Multi-purpose centre is being renovated at the tune of USD 100,000.00 by the Government of Taiwan. This is one of many facilities provided by the Republic of China on Taiwan to the Armed Forces and will enhance our operational capability and effectiveness.”

He said they are also aware of the progress being made by members of GAF through attending various military institutions in Taiwan thanks to the support of the Government and people of Taiwan. 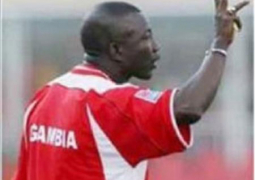