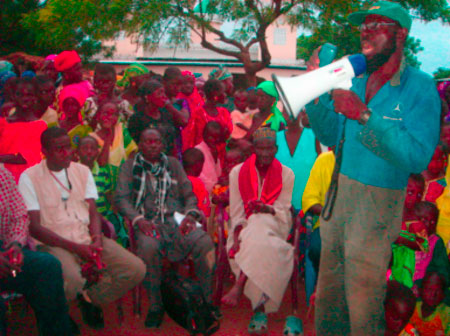 Beakanyang Kafo, a community-based organization in the Upper River Region of the country, recently concluded series of sensitization meetings in their climate change project intervention communities in Wuli West.

The meetings were held at village bantabas and schools in Limbambulu Yamadou, Barrow Kunda, Chamoi Bunda, Draman, Jah Kunda and Gunjur Kuta, and attracted large crowds from a cross-section of the communities.

Speaking at various meeting grounds, the climate change project coordinator of Beakanyang, Nfamara Jawneh, said the objectives of the meetings were to discuss with various communities the scope of the project, their roles and responsibilities and to help thrash out any possible challenges in their implementation process.

According to him, since January 2013, they have had series of meetings and activities with representatives of the intervention communities, village heads, and other interest groups in the villages but bringing the entire community together to discuss the project was equally necessarily.

“We want everyone in the communities to actively participate in this project and to have a sense of ownership over the project,” he said.

He reminded the meetings that the project, dubbed: “Mitigating the effects of climate change at grassroots level”, is a 12-month undertaking being implemented by Beakanyang with funding from the Global Environment Facility Small Grant Programme under the UNDP.

According to Jawneh, the objective of the project is to create the much needed awareness about climate change among rural communities and to encourage them to work on mitigation strategies.

“Before I conclude my introductory remarks, I would encourage you all to listen attentively and to share the knowledge with those who could not make it to this meeting,” Jawneh told a gathering in Jah Kunda.

For his part, Tumani Danjo, President of Beakanyang, disclosed that in the coming weeks they would provide thousands of trees to be planted in the intervention communities as well as fencing materials for communities working on wood-logged gardens.

He stressed the need for communities to take proper care of the trees to be planted as their benefits would in future be enormous for them and the next generation.

“During the past couple of days, we have been crisscrossing communities across Wuli trying to mobilize local people in the fight against climate change thus complementing government’s efforts,” Danjo told a meeting in Gunjur.

In his address, the project field assistant of Beakanyang, Alhagie Lamin Touray, said the meetings were also meant to thank the communities for their level of commitment and support since the commencement of the project.

He said their intention is to replicate the success story of the project to other communities in the region come next year.

Meanwhile, the Alkalo of Limbambulu, Fodalimang Fatty, thanked Beakanyang for considering his village for the project and assured the CBO of their commitment to ensuring its successful implementation.

Chamoi Bunda alkalo Ebrima Touray said they were pleased to have in their community a high-powered delegation from Beakanyang sensitizing them about the effects of climate change.

At the Barrow Kunda meeting, a women leader, Matta Fatty, said they are every grateful to Beakanyang for championing sustainable environmental management and practices in communities.

Uncle Makalo, a youth leader in Jah Kunda, thanked Beakanyang for supporting the establishment of a community wood-logged garden in the village.

Aja Satu Waggeh of Gunjur Kuta encouraged her community members to put the knowledge gained from the meeting into good use and help Beakanyang in their environment-sustainable efforts.

Aja Fatou Drammeh of Draman village told the meeting in Draman that their village is out to take first among all the intervention communities.

Attended by traditional communicators known as kanyalengos, who sang songs about climate change, the meetings were punctuated by questions and answers between the villages and the Beakanyang team.

CPA on Links Between CSEC and HIV/AIDS