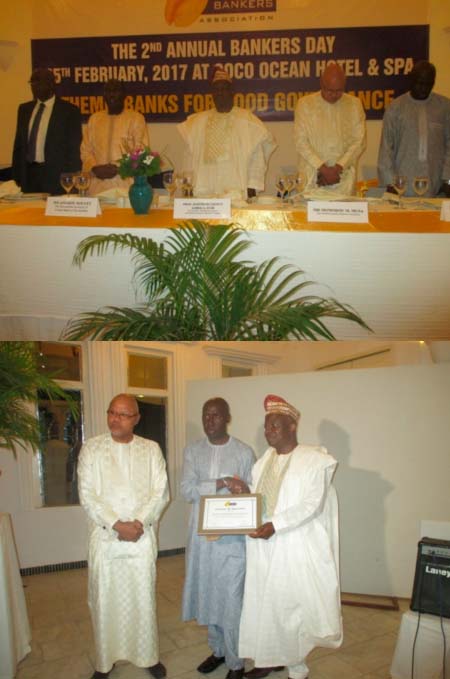 The Gambia Bankers Association (GBA) on Saturday held its annual Bankers Day celebration at a hotel in Bijilo on the theme ‘Banks for good governance’.

The day was meant to bring together stakeholders in banking and other financial sectors, government, and the general public to interact informally and to be informed about the achievements of the bankers association and its subsidiary, Institute of Bankers of The Gambia.

Speaking on the occasion, the minister of Finance and Economic Affairs, Amadou Sanneh, said the government of The Gambia is committed to addressing the challenges in the financial sector in a holistic manner to boost enterprise growth, create jobs for youths, diversify the economy through structural change in partnership with the international community.

He said the government would provide a stable political and macroeconomic environment, fiscal discipline and good governance, well functioning legal and information infrastructure necessary for the growth of the economy.

Mr Sanneh said the government would ensure a strong financial regulation and supervision that enable greater market monitoring without distorting the initiatives and incentives of market participants.

“Through this effort, broad access to financial services will be facilitated and achieved with invaluable participation of our banking sector in introducing new financial products, development of investment banking operations for longer term investments,” he said.

The institute was established with the aim of providing quality training in banking and finance in line with international standards.

Mr Musa said the institute, from inception, has made a lot of strides in its mandate to train bank employees and other members of the public who want to build a career in banking and finance.

“The knowledge and skills acquired from the institute is invaluable in the banking industry for professional services delivery to our ever increasing sophisticated clients,” he said.

“I am proud to inform you that we have registered success in the Associate Chartered Institute of Bankers (ACIB) examination over the past six years. We have consistently scored over 70% past rate in the examination and some of our students have scored distinction grades at the Chartered level.”

The executive secretary of GBA, Mamour Malick Jagne, said since the establishment of the association, members have been “busy working together which means success”.

He said:  “A major milestone in the history of the Gambia Bankers Association was the signing of a Memorandum of Understanding with the Chartered Institute of Bankers of Nigeria on the 17th January, 2011.

“The MOU gave the authority to the Gambia Bankers Association to run the CIBN curriculum and to serve as an external examination centre.  This relationship has changed the quality of banking training programme in The Gambia.”

The chairman, board of trustees, Pa Macoumba Njie, said from 2011 to date, the institute has generously and consistently assisted The Gambia to register, train and award internationally recognised certificates in banking and finance to more than 200 Gambians and non-Gambians from diploma to chartered levels.

The chairman of council of the Chartered Institute of Bankers of Nigeria, Prof. Joseph Olusegun Ajibola, also spoke on the event.