24 Year Old Man Sent to Jail for Burglary and Theft

The Kanifing Magistrates' Court presided over by Magistrate B. Mahoney on 28th May 2009 convicted and sentenced one Miniru Saffiwiru to a custodial sentence of three months on the count of Burglary. On the second Count of Theft he was also sentenced to a fine of D3000 in default to serve another three months.

The court also further ordered the accused to compensate the complainant the sum of D3000 in default to serve three months imprisonment.

Before announcing the verdict, Magistrate Mahoney noted that the accused was charged with the offence of house-breaking and stealing, adding that the accused jumped bail, and a bench warrant was issued for his arrest.

According to Magistrate Mahoney, the prosecution in trying to prove their case called two witnesses, adding that they have proven their case beyond all reasonable doubt.

His Worship Mahoney also urged the convict to rehabilitate himself, and warned him that if found guilty again he will face a long custodial sentence. 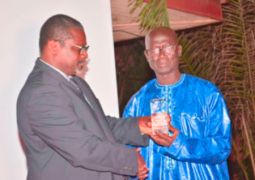