Nominations ahead of the 29th March National Assembly Election closed Saturday, with 24 out of a total of 48 elected seats in the National Assembly going to the ruling APRC, whose candidates were declared nominated unopposed, due to a pulled out of the election by six opposition parties.

Nomination results released by the Independent Electoral Commission, IEC, showed that the opposition National Reconciliation Party, NRP, the only opposition party taking part in the election, has fielded eight candidates including party leader Hamat Bah, who is eyeing a comeback as a parliamentarian for the constituency in the Central River Region.

Results also showed that a total of 20 independent candidates, including the youth leader of the opposition UDP party, and Kebba Yerro Manneh, a social commentator, have been nominated to seek the mandate of the electorate in their constituencies.

This now paves the way for elections in only 24 out of the 48 constituencies.

Six out of seven opposition parties in the country boycotted the parliamentary polls, after declaring in a statement last Thursday that they “are pushed not to participate in the National Assembly elections.”

With the boycott, the opposition now loses key seats in the Wuli West, Sami, Kiang West and Jarra Central constituencies, which were all held by the opposition.

In a joint statement signed by the leaders of the opposition parties namely, UDP, PDOIS, NADD, PPP, GMC and GPDP, they said since the Independent Electoral Commission has made it categorically clear that it will not postpone the polls, to accommodate “our genuine concerns and win the confidence of our supporters we, therefore, are pushed not to participate in the National Assembly elections.”

The move came a day after leaders of the opposition called for the postponement of the scheduled National Assembly Election, citing what they said was the delay by the IEC to meet the opposition to discuss how to put the right conditions in place for genuine elections in the country.

However, the IEC rejected the criticism, insisting in a letter dated 5th March that the National Assembly election would be held as scheduled.

Among their demands to the national electoral commission, the opposition parties called on the IEC to address issues relating to the use of state resources during campaign periods, involvement of regional governors and chiefs, as well as media bias during national elections. 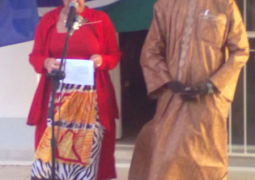