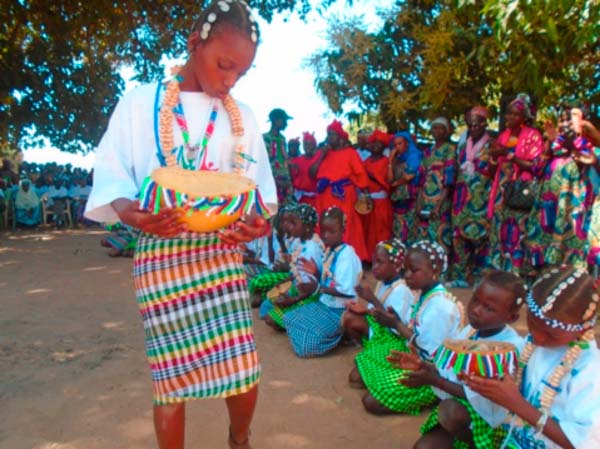 Twenty-two Fulla communities in Tumana, Kantora and Basse Jimara, all in Upper River Region over the weekend convened in Mankaman Kunda to solemnly and voluntarily declare their intention to abandon the practices of Female Genital Cutting (FGC), early and forced marriages within the region.

The landmark event came as a result of a three-year intensive training exercise under the community empowerment programme funded by UNICEF and implemented by Tostan The Gambia.

Prior to the declaration, these communities had undergone a successful three-year training session under the community empowerment programme covering modules on democracy, good governance, human rights and responsibility, problem-solving process, health and hygiene, according to Tostan officials.

In her declaration speech on behalf of the communities, Ms Julia Gisseh said the declaration came following a series of sensitisation programmes on human rights and responsibilities, democracy, problem-solving, health and hygiene modules, which led to this historic declaration.

She said: “Our historic decision aims to reinforce the national movement for the promotion of human rights in The Gambia, Africa and the world at large based on the community initiative originated in Tostan’s Community Empowerment Programme, in partnership with UNICEF and the Government of The Gambia and other development partners in URR since 2006, including the communities which were reinforced with sensitisation and social mobilisation activities by the community management committees and social mobilisation agents.

“We join the historic movement that started in Dasilameh Mandinka in Sandu district of URR on 15 June 2009, which has not ceased to shine in our URR region where about 181 communities have now abandoned the practice of female genital cutting and child marriage to protect and promote women and girls’ health and sexuality.”

Ms Gisseh called on other communities in the URR and the rest of the country to join the movement, and expressed gratitude to the government of The Gambia and their development partners, especially UNICEF for their continued support.

Ms Salimatou Baldeh, chairperson of the Steering Committee, maintained that harmful traditional practices are a violation of fundamental human rights and dignity for all, especially women and girls.

“Today we are witnessing another important milestone as a testimony of the achievements registered by our communities that are present, most of whom have participated in the community empowerment programme jointly implemented by Tostan-UNICEF and the Government of The Gambia in thirty Fula communities in URR.”

She added that after evaluating effects of the practices, often with careful observation, discussions and dialogue with community members and local and influential leaders, the twenty-two communities have decided to abandon harmful cultural practices, such as female genital cutting, child and forced marriage.

The decision comes after the participating communities have participated in a three-year holistic community empowerment programme led by Tostan facilitators, social mobilisation and sensitisation activities by community management committees and class participants and reinforced by the social mobilization agents, she said.

The activities were on issues affecting the health, physiological and psychological well-being of women and girls, seen as a violation of fundamental human rights as enshrined in the universal declaration of human rights, convention on the rights of the child, convention on the elimination of all forms of discrimination against women, and the Africa charter on human and peoples’ rights, among a host of modules facilitated by Tostan.

The Village Development Committee (VDC) chairman of Mankamang Kunda, Jankeh Baldeh, underscored the importance attached to TOSTAN, saying the NGO had demonstrated keen interest in the improvement of The Gambia and the livelihood of his village communities.

Gibba Baldeh of the social mobilization team applauded TOSTAN for the initiative, while assuring the organisation that henceforth the communities “have dropped the knife”.

“No more FGC in Jimara,” she declared, applauding TOSTAN for the intervention.

Speaking on behalf of the executive director of the Women’s Bureau, Ms Neneh Touray hailed the communities for voluntarily declaring the abandonment of the FGC practice, as well as early and forced marriage in the region.

She reminded the gathering that there are punishments attached to conducting the practices, and urged the communities to adhere to what they openly declared.