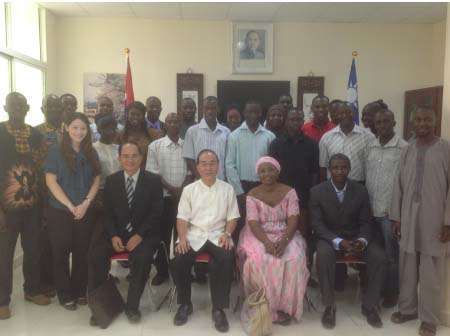 The Embassy of the Republic of China (Taiwan) held the 2013 Scholarship Orientation Ceremony for 22 Gambian students on Wednesday, 14 August, at Taiwan Culture Centre ahead of their departure to the Asian country.

Among the 22 scholarship recipients, 17 were awarded with ICDF Scholarship and 5 with MOFA Taiwan Scholarship, which is totally made up of 15 master’s programs and 7 bachelor programs.

His Excellency Ambassador Samuel Chen, on behalf of the ROC Government, awarded certificates and the package of e-tickets and visa to the students at the event.

Besides, the Embassy arranged a special presentation to introduce different universities and the cultural diversity in Taiwan for the students.

The Taiwan Alumni Association (TAA) was also invited to witness the ceremony while the President of TAA, Mrs Kumba Conateh, and the Secretary General of TAA, Mr Sadibou Jammeh, sharing the experiences of studying in Taiwan.

Meanwhile, The Gambia once again, takes the biggest part of the ROC scholarship among all the African countries.

Notably, it is not the first time for this true ally of Taiwan to get the special honour, says ROC envoy.

As a show of their appreciation to Taiwan Government, a representative of the students also gave the vote of thanks at the ceremony.