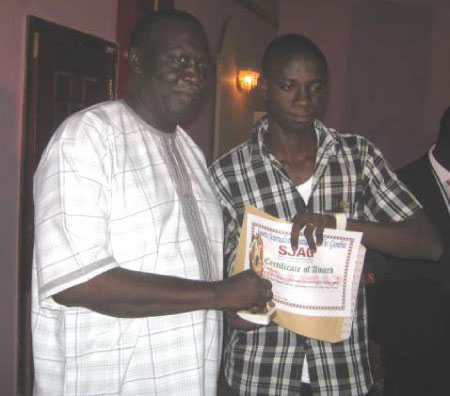 Sulayman Bah of Foroya newspaper emerged winner of the 2011/ 2012 most outstanding Sports Journalist writer of the year at the 4th edition of the sports journalists Association The Gambia award ceremony held at the SunSwing Hotel in Kololi last Saturday.

Sulayman earned his award after a public vote under Africell line, 7401 and with his work articles presented to The Gambia Press Union for scrutiny.

Speaking to the Pointsports at the end of the ceremony, Sulayman Bah expressed joy over the award presented to him.

“I felt so excited and surprise when I heard my name called as the winner of the 2012 sportswriter,” Bah said, while thanking the association for their contribution in promoting young sports journalists in the country.

Sulayman urged his fellow reporters from various media houses to take their profession with great seriousness, adding that journalism is one the most recommended profession in the world.

Finally, he urged all the journalists to work together, respect and support one another as one family.