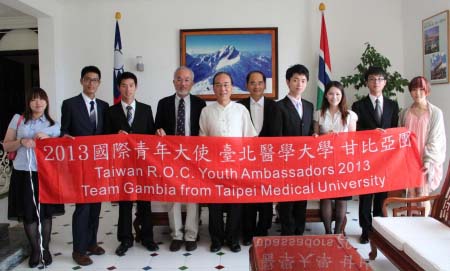 The 2013 Taiwan Youth Ambassadors’ summer camp in The Gambia was officially opened yesterday at the Baobab Holiday Resort in Bijilo.

This year, seven students led by their Professor Vincent Lee (WEN-SEN LEE) of the Taipei Medical University were joined by thirty-five local students drawn from various higher institutions of learning under the auspices of the National Union of Gambian Students (NUGS), who make up the 2013 ambassadors.

Speaking at the opening ceremony, H.E. Samuel Chen, Taiwanese Ambassador to The Gambia, welcomed the youth ambassadors to the Smiling Coast.

According to him, the visit of the youth ambassadors is meant to strengthen bilateral ties between The Gambia and Taiwan.

He informed participants that as an ambassador, their roles include serving as a bridge of communication between two nations, coordinator of cooperation, promoter of friendship and transmitter of bilateral culture.

“As youth ambassador you could play a vital role in promoting friendship between our two countries,” he said.

For her part, Mariama Ndure-Njie, permanent secretary at the Ministry of Foreign Affairs, also welcomed the students to The Gambia.

According to her, youth are the pillars of our societies and also the future of our countries.

“It is in this realization that our leaders have carved a vision that will instill in our younger generation the spirit of internationalism, partnership and knowledge of one another to facilitate understanding, goodwill and meaningful cooperation,” she said.

She added: “As we are aware, the world is experiencing tensions and challenges. There is mutual suspicion and serious challenges to international cooperation and partnership.”

She expresses hope that such anxieties can only be eliminated through programmes of this nature which brings our youth together in an atmosphere of solidarity and partnership.

PS Njie implored on the youth ambassadors to take the camp seriously, network among themselves and nurture friendship.

“As youth, this is an important opportunity to further develop your talents and potentials as you prepare yourselves as the future leaders of The Gambia and Taiwan,” she remarked.

She also recognised the contribution of the Republic of China (Taiwan) to the socio-economic development of The Gambia, especially in areas of education and capacity building.

The head of the team, Professor Lee, expressed their delight in visiting The Gambia, saying that since their arrival in the country they have observed that although Gambians might not be rich materially they are very rich at heart.

Other speakers on the occasion included Jerreh Sanyang, permanent secretary of the Ministry of Higher Education, Research, Science and Technology, who said his ministry is one of the major beneficiaries of the Bunjul-Taipei ties.

He expressed his admiration for the involvement of youth in the bilateral cooperation between the two countries, saying that since they are the future leaders they are key to everlasting cooperation.

Meanwhile, the camp, which will last for two weeks, includes 35 local students drawn from the University of The Gambia, MDI, GTTI and Gambia College.