A three-day meeting offocal persons on the exemption to the ECOWAS convention on small arms and light weapons opened on Wednesday at the SunSwing Hotel.

The meeting, which brought participants from various ECOWAS member states, is hosted by the Ministry of Interior.

Speaking on the occasion, Salamatu Hussaini Suleiman, commissioner for political affairs, peace and security at the ECOWAS Commission, thanked the Government of The Gambia for hosting the meeting and for the excellent facilities provided to them to ensure successful deliberation.

According to her, the meeting is taken place within the framework of the implementation of the ECOWAS Convention on Small Arms and Light Weapons, their Ammunition and other related materials with the aim of further strengthening Member States’ commitment and efforts towards putting in place robust control measures over the transfer of SALW within the region.

Throughout the meeting, the focal persons will share experience on their involvement in the exemption procedures, the challenges that they face for them to identify the best way to ensure an effective monitoring of the process from the Member States side.

In his official opening remarks, the minister of Interior, Hon. Ousman Sonko, said the Government of The Gambia is cognizant of the threats to national and sub-regional security posed by the proliferation of SALW.

He said therefore, the Government of The Gambia views the hosting of the workshop as another noteworthy step in their determination as ECOWAS Member States to strive towards building a secure region.

“Our region has been characterised by considerable instability. The proliferations of small arms and light weapons have deeply affected the stability of Africa and indeed West Africa,” he said.

Speaking earlier, the permanent secretary of the Ministry of Defence, Yusupha B. Dibba, said the meeting signifies a positive stance in dealing with small arms and light weapons as a major concern for peace and stability in the region.

He also said the preoccupation of ECOWAS and the past pronouncement of Heads of State and Governments point to the fact that the proliferation of small arms and light weapons must be systematically monitored by all member states to guarantee security.

Mr Dibba noted that the ECOWAS small arms and light weapons (SALWs) unit is therefore charged with the task of monitoring and control of the movement of arms and weapons, through the SALW convention.

He said the unit is also responsible for laying the rules and regulation and setting up criteria for exemption procedures with which all ECOWAS government are expected to comply.

The workshop would emphasise the strengthening of National Commissions on small arms and promote the urgency of member states legislation for commitment to a peaceful region spared from the dangers of proliferation and the aftermath of conflicts, he said.

According to PS Dibba, the meeting would only succeed if all the SALW activities of Member States are shared and stakeholders in the security services are committed to control porous borders and share information on all aspects for the implementation of the convention. 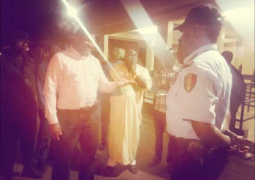