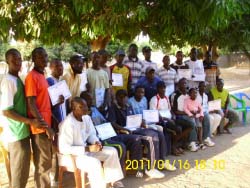 Pa Suwareh Faye, assistant director of sports at the Ministry of Youth and Sports, spearheaded the programme.

Speaking to this reporter at the closing ceremony, Gebril Jarju, president of Banjulinding Youth and Sports Committee, commended Pa Faye for his foresight in promoting sport, particularly football, in the area.

"This is the first of its kind in the history of football in the area," he said.

Jarju added that the training would help the coaches to improve their professionalism in football.

Preparations are in high gear to organise a noran football tournament, he also says, adding that so far eight teams have already registered for the tournament and have been furnished with the rules and regulations of the much anticipated event.

For his part, Pa Suwareh Faye, sponsor of the tournament, who was also serving as the course instructor, spoke at length on the importance of sport.

Pa Faye said football, like other sporting disciplines, has regulations that govern it. “It is very important for anybody who wants to venture into the game to have the knowledge of what to do and what not to do,” he said.

"I have come to join the community of Banjulinding and I am prepared to give technical and moral support to the people of Banjulinding in a bid to promote sport in the area."

Pa Faye says plans are underway to create more opportunities to revive sports in the area and the country as a whole.

He commended the Gambia Football Association, the National Sports Council and the Ministry of Youth and Sports for the moral and technical support they are giving towards the development of sport in the country.

He also praised Banjulinding Sports Committee for its readiness to take sport to higher heights in the country.