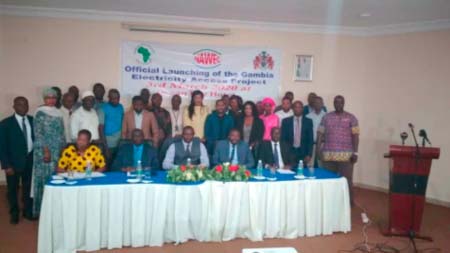 The Ministry of Finance and Economic Affairs in collaboration with National Water and Electricity Company (NAWEC) have launched a 17 million dollar electricity access project for the country to contribute to government efforts in achieving access to electricity by 2030.

Funded by the African Development Bank (AfDB), the projects aims to provide sustainable energy to all genders.

Permanent secretary at the Ministry of Petroleum and Energy, Lamin Camara said the overall beneficiaries of the project will be domestic households, small businesses and public institutions to greatly reduce or eliminate the connection charges while also deploying prepaid meters.

“The project is expected to have a transformative impact on the short –term affordability of gaining access in spirit of strengthening the capacity of NAWEC to improve customer services delivery,” he said.

Minkailou Halidou Toure, African Development Bank project team leader said financing the project reflects the Bank’s sustained support to the development of The Gambia, expressing the AfDB’s commitment to support the country in achieving universal access to energy for the population.

“The bank is among the lead financiers of the ambitious OMVG interconnection which is currently under implementation. It is in line with this dynamic project to build on the previous achievements aim to connect at least 61,000 -10, 00 for AfDB financing- households through the densification and extension network from soma and Brikama station,” he said.

He added that the ultimate objective of the project is to increase Gambian population access to affordable and reliable electricity service and it will involve the construction of medium and low voltage lines erection to transformers and connection of customers in Lower River, North Bank, Central River and West Coast Region.

“The 16,000 beneficiaries of the project will be households including women, small businesses, public institutions, local government, high schools and health centers in urban and rural areas,” he added.

Buah Saidy, Permanent Secretary at the Ministry of Finance and Economic Affairs said the Gambia is a developing country and its development and growth potentials have been impeded by inadequate supply of affordable and reliable electricity.

He assured that the government is resolved to address the problems to achieve development aspirations. “Gambia Government attaches great importance to the energy sector and it is not relenting in its efforts to resolve issues related to the production and distribution of reliable and affordable electricity to facilitate the socio-economic development of the country,” he said.

Previous:
Regional Consultation on Implementation of SDGs concludes in Banjul
Next:
GVBF to hold AGM on March 21st