This year, the number of Gambians that would be allowed for pilgrimage in Mecca is 1,700, the Amir ul-Hajj of The Gambia has said.

“This year The Gambia has received an allotment for 1700 pilgrims,” he said during a meeting this week between President Adama Barrow and members of the Gambia Hajj Commission, who called on him the president at his office in Fajara.

Dr Jah said in addition to the 1,700 pilgrims, 20 officials from the Hajj Commission which includes Gambia International Airline staff and health officials would be cleared to facilitate the administration of the Hajj.

The Amir ul-Hajj also gave an account of the various steps taken to improve the management of the Hajj, including use of new technology for the relevant transactions with the Saudis.

He said it was a requirement of the Saudi authorities that each country must have a Hajj commission to avoid political interference in the management of the Hajj.

He explained that the Saudi government worked through diplomatic missions but the logistical issues of the Hajj are arranged through Hajj commissions.

The ten-man commission took the opportunity to appeal for the government support to provide logistics to facilitate the work of the Gambia Hajj Commission.

Commission member Imam Baba Leigh called for government to support the commission’s endeavour to provide the very best for Gambian pilgrims, and to improve the country’s image.

Meanwhile, President Barrow has pledged to work with institutions like the Gambia Hajj Commission and the Supreme Islamic Council to provide the support that they need.

He called on the religious leaders to promote peaceful coexistence, and said the selection of commission members should always be based on their qualifications and experience in Hajj matters.

While commending the Gambia Hajj Commission for its management of Hajj matters, the president said his government would develop a policy to guide the liberalisation of Hajj travel arrangements by 2018. 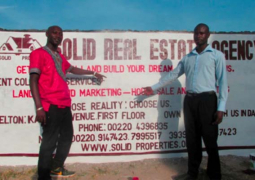