The 13th edition of the Banjul Demba Cultural Festival opened on Saturday at the capital city of with thousands taking part in one of ’s popular events.

The event started with a march-past from the Arch 22 to the Laico Atlantic Hotel and culminated with the display of different cultural groups.

According to him, Banjul Demba Cultural Festival was established 13 years ago and since then “it has been a great experience”.

Culture, he notes, is a way of life of people. “Therefore the role that Banjul Demba Cultural Festival plays remains as an important thing to recognize the needs for all to promote Gambian culture,” he said.

The DPS added that his ministry would continue to promote the Banjul Demba Cultural Festival, while calling on schoolchildren to involve in cultural festivals, so they would get more understanding of the Gambian culture.

Ousman Kebbeh, who spoke on behalf of the acting-director of the Gambia Tourism Board - Fatou Beyai - said tourism is considered as one of the key drivers of The Gambian economy.

Mr Kebbeh noted that in line with the millennium development goals, the vision for the tourism development is geared towards making The Gambia a tourist paradise and a major tourist destination through product innovation, quality improvement, improvement of investment returns, and diversification of The Gambia’s tourism product.

He however explained that promoting tourism through culture is considered a resource that could greatly enhance the country’s product innovation and diversification efforts, as outlined in Vision 2020.

“The is unique as a destination of peace, with a rich cultural diversity of beautiful and friendly people,” Mr Kebbeh added, saying the country’s unique selling point is its people and her culture, which are the core of the responsible tourism policy that makes strategies and product offer.

The offering in The Gambia is remarkably rich with considerable potential for further development of the cultural heritage based on living culture, which is possible in a way that makes the Gambia distinctive, Mr Kebbeh noted.

For his part, the secretary general of the Banjul Demba Cultural Organization (BDCO), Emmanuel Williams, thanked all those who supported and contributed to the success of this year’s festival, particularly the sponsors.

Speaking on behalf of the acting-director of the National Centre for Arts and Culture (NCAC), Matty Jobe said Banjul Demba Cultural Organization is one of the most prominent groups in the development of arts and culture in the country.

She explained that since its inception, the BDCO has been not only a stakeholder but also an indispensable partner of the NCAC in its drive to enhance peace and unity through the strengthening and spreading of cultural awareness in the country, particularly in Banjul. 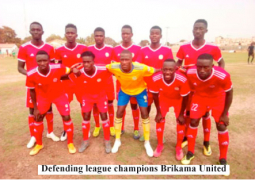