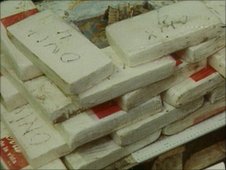 Over two tonnes of cocaine has been seized by security agents in The Gambia.

According to our sources, 2 tonnes, 340kg and 860grams had been seized.

In addition to drugs, large quantities of cash and arms were also reported to have been seized.

The source revealed that the suspects, which include Dutch, Venezuelan, Ghanaian and Nigerian nationals were first caught on Wednesday 12 May 2010 with 3 kilos of cocaine and 30,000 Euro at Brusubi a new residential estate in the Kombo North district of the Western Region of the country.

The source added that the arrest of the suspects led the investigators to discover the large quantity of cocaine last Friday in the basement of a warehouse located in Bonto a village in the Kombo East district of the Western Region.

According to our source, the suspects are expected to be arraigned in court today Wednesday 9th June 2010.