PRAYERS: Obligatory acts of prayer, The Salaam (Peace Be Upon You and the Mercy of Allah) at the Prayer’s End 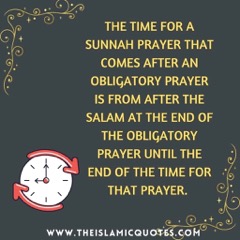 Saying the salaam at the end of the prayer is obligatory. ‘Ali related that the Prophet said, “The key to prayer is purity. One enters into its inviolable state by the takbir and leaves it by the salaam.”

As to its authenticity, the report is related by Ahmad, ash-Shaf i, Abu Dawud, Ibn Majah and at-Tirmizhi who said, “That is the most authentic report on this topic and the best.”

‘Amr ibn Sa’d related that his father said, “I saw the Prophet making the salaam on his right side and on his left side until I could see the whiteness of his cheeks.” (Related by Ahmad, Muslim, an-Nasa’i and Ibn Majah.)

Reported Wa’il ibn Hajr, “I prayed with the Messenger of Allah. He would make the salaam on his right side by saying, ‘Peace be upon you and the mercy of Allah.” In Bulugh al-Maram, Ibn Hajr says that Abu Dawud related it with a sahih chain.

It is obligatory to say one salaam, and it is preferred to say two. Ibn al-Munzhir comments that all scholars agree that making only one salaam is permissible. Ibn Qudamah writes in al-Mughni, “There is no clear text from Ahmad that states that two salaams are obligatory. He only said, ‘Two salaams are the most authentic act from the Messenger of Allah.’ It is permissible to say that this is the regulation, although it is not obligatory, and others have the same opinion. This is also pointed out in another of his statements where he said, ‘Two salaams are more loved by me. But ‘Aishah, Salamah ibn al-Aku’ and Sahl ibn Sa’d narrated that the Prophet, upon whom be peace, made only one salaam.” We can reconciliate these differences by stating that it is Sunnah to say two salaams, but it is obligatory to say one. This is the consensus that Ibn al-Munzhir mentioned, and we have no option to reject that. Says an-Nawawi, “It is the opinion of ash-Shaifi and most of the early and later scholars that it is Sunnah to say two salaams.” Malik and a group of scholars say that only one salaam is Sunnah. They adduce this from a weak hadith that cannot be used as a proof. If something of this nature had been confirmed from the Prophet, the act was probably done just to show that it is permissible to say only one salaam. Scholars are agreed that only one salaam is obligatory. If one makes only one salaam, he should turn to his right for the first one and to the left for the second one. He should turn until his cheeks can be seen from behind. That is the most authentic form and it is said, “If one says the two salaams to the right or to the left while facing forward, or the first one on the left and the second one on the right, then his prayer would still be valid and he would have fulfilled the act of the two salaams. But, he would have lost the virtue of how they are to be performed.”

The prayer also has certain acts which are Sunnah. It is preferred that the person performs them to get their reward.

Commenting upon this report, Ibn Hajr says, “The Prophet’s raising his hands at the beginning of his prayer has been narrated by fifty companions, including the ten who were given the tidings of Paradise. “ Al-Baihaqi related that al-Hakim said, “I do not know of any Sunnah other than this one which is accepted by the four rightly-guided khalifahs, the ten companions who were given the tidings of Paradise, and other companions scattered across many lands.” Summing up his evaluation of the report, al-Baihaqi says, “And it is as our teacher Abu ‘Abdullah has said.”

Sunnah acts of prayer, How to Raise the Hands

Many narrations have been recorded concerning this subject. Many scholars have chosen the following forms: the hands are raised to the shoulders with the fingertips parallel to the button of the ears. Says an-Nawawi, “This is how ash-Shaifi combined the hadith (on this question), and the people found it to be good.” It is preferred that one extends the fingers while raising the hands. Abu Hurairah said, “When the Prophet, upon whom be peace, stood for prayer, he would raise his hands (with them being) open.” (Related by “the five,” except for Ibn Majah.)

Sunnah acts of prayer, When to Raise the Hands

One must raise the hands at about the same time he makes the takbir. Nafa’ related that when Ibn ‘Umar would begin his prayer he would say the takbir and raise his hands. The Prophet also did this. (Related by al-Bukhari, an-Nasa’i and Abu Dawud.) He also reported that the Prophet, upon whom be peace, would raise his hands upon making the takbir until they were parallel to his shoulders or close to that. (Related by Ahmad and others.)

It is preferred to raise one’s hands while going to bow and upon coming up from the bow.

Twenty-two companions narrated that the Prophet, upon whom be peace, did so. Reported Ibn ‘Umar, “When the Prophet, upon whom be peace, stood to pray, he would raise his hands until they were the same height as his shoulders and then he would make the takbir. When he wanted to bow, he would again raise his hands in a similar fashion. When he raised his head from the bowing, he did the same and said, ‘Allah hears him who praises Him.’ (Related by al-Bukhari, Muslim and al-Baihaqi.) Says al-Bukhari, “He would not do that when he was going to prostrate nor when he came up from his prostration.” Al-Bukhari also says, “He would not raise his hands between the two prostrations.” Al-Baihaqi has the addition, “He did not stop doing that until he met Allah.” Ibn al-Madini said, “In my opinion, that hadith is a proof for the whole creation. Whoever hears it must act by it. There is nothing wrong with its chain.” Al-Bukhari wrote a pamphlet on this topic, and related from al-Hassan and Humaid ibn Hilal that the companions used to (perform their prayers) in this manner.

On the contrary, the Hanafiyyah say that one should only raise his hands at the beginning. This is based on the hadith of Ibn Mas’ud, who reported, “I prayed with the Prophet, upon whom be peace, and he raised his hands only once.” This is a weak opinion, and many hadith scholars have criticized this report. Ibn Hibban, though, said that this is the best report.

Nafa’ related that when Ibn ‘Umar stood for the third rak’ah, he would raise his hands, an action which he ascribed to the Prophet. (Related by al-Bukhari, Abu Dawud and an-Nasa’i.) While describing the Prophet’s prayer, ‘Ali said that when he stood from the two prostrations, he would raise his hands until they reached his shoulders and make the takbir.