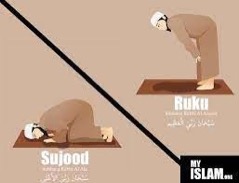 There is a consensus on the obligatory nature of the ruku’. Says Allah, “O you who believe, bow down and prostrate yourselves...” The position of ruku’ is established by bending over, putting one’s hands on one’s knees, and remaining in that position until he attains “calmness.”

In another hadith the Prophet said, “Then bow until you attain calmness while you are bowing.” Abu Qatadah related that the Prophet, upon whom be peace, said, “The worst people are the thieves who steal part of the prayer.” He was asked how this was done, and he replied, “He does not complete his bowings and prostrations,” or he said, “He does not straighten his back during his bowings and prostrations.”

As to its authenticity, the report is related by Ahmad, at-Tabarani, Ibn Khuzaimah and al-Hakim, who consider its chain as sahih.

Abu Mas’ud al-Badri reported that the Prophet, upon whom be peace, said, “The prayer of one who does not straighten his back in his bendings and prostrations is not accomplished.” This hadith is related by “the five,’’ and Ibn Khuzaimah, Ibn Hibban, at-Tabarani and al-Baihaqi, who consider its chain as sahih, while at-Tirmizhi grades it as Hassan sahih.

Knowledgeable companions act according to the principle that a person is to make his back straight during his bowings and prostrations. Huzhaifah saw someone who did not straighten his back during his bowings and prostrations, and told him, “You have not prayed. And if you were to die, you would not die in the way of Allah and His Messenger.” (Related by al-Bukhari.)

Obligatory acts of prayer, Standing Erect After the Bowing

This is based on Abu Humaid’s description of the Prophet’s prayer: “He would raise his head from his bowing, then stand straight until all of his backbones returned to their places.” (Related by al-Bukhari and Muslim.)

‘Aishah related that when the Prophet raised his head from bowing, he would not prostrate until his back was straight. (Related by al-Bukhari and Muslim.)

Abu Hurairah reported that the Prophet said, “Allah does not look at the prayer of a person who does not straighten his back between his bowings and his prostrations.” (Related by Ahmad. al-Munzhiri considers its chain as good.)

Obligatory acts of prayer, How to Attain Calmness

The “calmness” comes from sitting in the position until the bones are set and still. Some scholars say that, at a minimum, this would take as long as it takes to say one Subhaan Allah.

Obligatory acts of prayer, Bodily Parts That Touch the Ground During Prostration

Abu Humaid reported that when the Prophet, upon whom be peace, prostrated, he placed his nose and forehead on the ground. This hadith is related by Abu Dawud and at-Tirmizhi who said, “The scholars act according to this: a person prostrates on his nose and forehead.” According to some scholars, if one prostrates on just the forehead without the nose touching the ground, it will still be sufficient. Others say that it would not be sufficient until his nose touches the ground.

Obligatory acts of prayer, The Final Sitting and Recital of the Tashahud

The Prophet’s practice illustrates that when the final sitting of the prayer has been made, one must recite the tashahud at that time. In one hadith, he said, “When you raise your head from the last prostration and sit for the tashahud, you have completed your prayer.”

The most authentic report concerning the tashahud is Ibn Mas’ud’s, who said, “When we would sit with the Prophet in the prayer, we would say, ‘Peace be upon Allah before His slaves, peace be upon so and so.’ The Prophet said, ‘Do not say peace be upon Allah, for Allah is peace. When one of you sits, he should say salutations be to Allah, and the prayers, and the good deeds, peace be upon us and upon Allah’s sincere slaves (if you say that, it applies to all of Allah’s sincere slaves in the heavens and the earth). I bear witness that there is no god except Allah. I bear witness that Muhammad is His slave and Messenger.’ Then you may choose whatever supplication you desire.” (Related by “the group.”)

Says Muslim, “The people are in agreement over the tashahud of Ibn Mas’ud, and the companions do not differ over it.” At-Tirmizhi, al-Khattabi, Ibn ‘Abdul-Barr and Ibn al-Munzhir all agree that Ibn Mas’ud’s hadith is the most authentic one on this topic.

Said Ibn ‘Abbas, “The Messenger of Allah used to teach us the tashahud like he taught us the Qur’an. He would say, ‘Salutations, blessings, prayers and good deeds for Allah. Peace be upon you, O Prophet, and the mercy of Allah and His blessings. Peace be upon us and the sincere slaves of Allah. I bear witness that there is no god except Allah. I bear witness that Muhammad is His slave and messenger.” (Related by ash-Shaifi, Muslim, Abu Dawud and an-Nasa’i.)

Says ash-Shaifi, “Different hadith have been related about the tashahud, but that one is the best in my opinion, for it is the most complete. Al-Hafez states, “Ash-Shaifi was asked about this choice and the tashahud of Ibn ‘Abbas, and he replied, ‘I have found it to be the most encompassing. I have heard it from Ibn ‘Abbas (through) authentic (chains). To me, it is more complete...”

There is another form of the tashahud that Malik chose. In al-Muwatta, it is stated that ‘Abdurahman ibn ‘Abdul-Qari heard ‘Umar ibn al-Khattab teaching the people, from the pulpit, this tashahud: “Salutations to Allah, purifications to Allah, the good deeds and prayers be to Allah. Peace be upon you, O Prophet, and the mercy of Allah and His blessings. Peace be upon us and Allah’s sincere slaves. I testify that there is no god but Allah, and I testify that Muhammad is His slave and messenger.”

Commenting on the stature of such hadith, an-Nawawi says, “Those hadith concerning the tashahud are all sahih. Hadith scholars are agreed that the strongest of them is the hadith of Ibn Mas’ud, and then the hadith of Ibn ‘Abbas. “ Ash-Shaf’i said that any tashahud one uses will suffice, for the scholars agree that every one of them is permissible.” 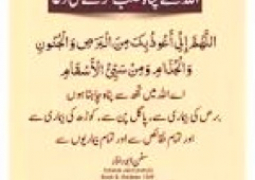