PRAYERS Sunnah acts of prayer, Placing the Right Hand upon the Left 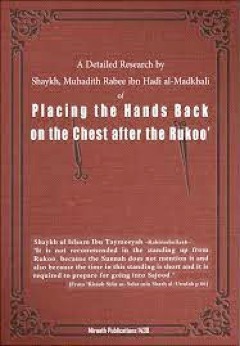 This is a preferred act of the prayer. There are twenty hadith from eighteen companions and their followers on this point. Said Sahl ibn Sa’d, “The people were ordered to place their right hand on their left forearm during prayers.” Commenting on this, Abu Hazm says, “I do not know if he ascribed this to the Prophet.” This hadith is related by al-Bukhari, Ahmad and Malik in his al-Muwatta.

Al-Hafez maintains, “Its ruling is considered to be from the Prophet, upon whom be peace, as it is implied that the one who ordered them to do so was the Prophet.” He also related that the Prophet said, “All prophets have been ordered to hasten the breaking of the fast and to delay the (pre-fast dawn) meal, and to place our right hands on our left during prayer.”

There is also a hadith from Jabir which says, “The Prophet, upon whom be peace, passed by a man praying with his left hand over his right, and (the Prophet) pulled them away and put his right over his left.” This is related by Ahmad and others. Evaluating its chain, an-Nawawi says, “Its chain is sahih. Ibn ‘Abdul-Barr holds, “Nothing has reached me different from that. It is the opinion of most companions and their followers.” Malik mentioned it in his al-Muwatta and states, “Malik never stopped doing it until he met Allah.”

Sunnah acts of prayer, The Position of the Hands

Al-Kamal ibn al-Hamam is of the opinion, “There is no authentic hadith stating that one must place the hands under the chest or below the navel. According to the Hanifiyyah, the hands are to be placed below the navel, and the Shafiyyah say below the chest. Ahmad has two narrations corresponding to these two opinions. The correct position is somewhere in the middle - to be equal.” Observes at-Tirmizhi, “Knowledgeable companions, their followers and those that came after them believed that one should put his right hand over the left during prayer, while some say above the navel and others say below the navel...” Nevertheless, there do exist hadith that the Prophet, upon whom be peace, placed his hands on his chest. Reported Hulb at-Ta’i, “I saw the Prophet, upon whom be peace, praying with his right hand over his left upon his chest above the elbow.” This is related by Ahmad and at-Tirmizhi, who grades it as hassan.

Reported Wa’il ibn Hajr, “Once when I prayed with the Prophet, upon whom be peace, he placed his right hand over his left upon his chest.” The report is recorded by Ibn Khuzaimah, who considers it as sahih, and by Abu Dawud and an-Nasa’i with the wording, “Then he put his right hand over the back of his left wrist and forearm.”

1             Reported Abu Hurairah, “When the Prophet, upon whom be peace, made the opening takbir, he would be quiet for a little while before his recitation. I asked him, ‘O Messenger of Allah, may my father and mother be sacrificed for you, why are you quiet between the (opening) takbir and your recitation? What do you say (at that time)?’ He said, ‘I say, O Allah, make the distance between me and my sins as far as you have made the distance between the East and the West. O Allah, cleanse me of my sins as a white garment is cleansed of dirt. O Allah, purify me from my sins by snow, rain and hail.” (Related by al-Bukhari, Muslim, Abu Dawud, an-Nasa’i and Ibn Majah.)

2             Reported ‘Ali, that when the Prophet stood for prayer, he would make the takbir and then say, “I have turned my face to the one who created the heavens and the earth as a sincere submissive (person), and I am not one of the polytheists. My prayers, my sacrifice, my life and my death are all for Allah, the Lord of the Worlds. He has no partner. That is what I have been ordered and I am of those who submit. O Allah, you are the King and there is no Lord besides You. You are my Lord and I am Your slave. I have wronged my soul and You are aware of my sins, so forgive all of my sins. No one forgives sins save You. Guide me to the best character. No one can guide to the best of that save You. Turn me away from its evil, and no one can turn me from its evil save You. At your beck and call, all the good is in Your hands and evil is not to You. And I am for You and to You are the blessings and the exaltedness. I seek your forgiveness and return unto You.” (Related by Ahmad, Muslim, at-Tirmizhi, Abu Dawud and others.)

3             It is related that ‘Umar used to say, after the beginning takbir, “Glory be to You, O Allah, and to You is the praise. Blessed is Your name and most high is Your honor. There is no Lord besides You.” This hadith is related by Muslim with a broken chain. Ad-Daraqutni traces it back to the Prophet and back to ‘Umar.

Commenting on it, Ibn al-Qayyim says, “It has been authenticated that ‘Umar began with that in the place (of the preceding prayer) of the Prophet, upon whom be peace. He would recite it aloud and teach it to the people. And owing to that fact, it is considered to have its source with the Prophet, upon whom be peace. For that reason, Imam Ahmad says, “I act by what has been related from ‘Umar. If a person begins with something that has been related, it is good.”

4             ‘Asim ibn Humaid asked ‘Aishah how the Prophet, upon whom be peace, began his late-night prayers. She replied, “You have asked me about something that no one before you have asked. When he would stand for prayer, he would make the takbir ten times (after the opening takbir), and then say ‘Alhamdu lillah’ ten times. He would then ask forgiveness ten times, and then would say, “O Allah, forgive me, guide me, provide for me, sustain me and give me refuge from a constraining place on the Day of Resurrection.” (Related by Abu Dawud, an-Nasa’i and Ibn Majah.)

5             ‘Abdurrahman ibn ‘Auf asked ‘Aishah how the Prophet, upon whom be peace, began his prayer when he would pray during the night. She said, “When he would get up during the night, he would begin his prayer with, ‘O Allah, Lord of Gabriel, Mikhail and Israfil, Creator of the heavens and the earth, Knower of the Unseen and the Seen. You will judge between Your slaves concerning matters wherein they differ. Guide me to the truth in those matters wherein they differ by Your permission, for You guide whom You will to the straight path.” (Related by Muslim, Abu Dawud, at-Tirmizhi, an-Nasa’i and Ibn Majah.)

6             Nafa’ ibn Jubair ibn Mut’am related from his father who said, “I heard the Messenger of Allah say in his voluntary prayer, ‘Allahu akbar kabeera’ three times, ‘al-Hamdu lillah katheera’ three times, ‘Subhanallahi bukratan wa asila’ three times, and then ‘O Allah, I seek refuge in You from Satan the accursed and from his pricking, spittle and puffing.’ I said, ‘O Messenger of Allah, what are his pricking, spittle and puffing?’ He said, ‘His pricking is the insanity by which he takes the children of Adam. His spittle is arrogance, and his puffing is (evil) poetry.” (Related by Ahmad, Abu Dawud, Ibn Majah and Ibn Hibban.)

9             It is Sunnah to say,”I seek refuge in...” silently. In al-Mughni, it states, “One should say the seeking of refuge silently and not aloud, and I do not know of any difference of opinion on that point.” But ashShaf’i was of the opinion that one may choose between saying it silently or aloud in those prayers recited aloud. It has been related that Abu Hurairah recited aloud, but this report has a weak chain.

10           The seeking of refuge is to be done in the first rak’ah only. Reported Abu Hurairah, “When the Prophet, upon whom be peace, would get up for the second rak’ah, he would begin with ‘al-Hamdu lillahi, rabb ul-’aalimeen’, without having any period of silence.” (Related by Muslim.)

Speaking of it, Ibn al-Qayyim says, “The jurists differ over whether or not that is a time to say, ‘I seek refuge...’ But they agree that it is not a place to make the opening supplication. On the former point, there are two opinions, both of them related from Ahmad. Some of his companions concluded that either the prayer is only one recitation, so it is sufficient just to seek refuge once, or that each recital is a recital by itself that requires the seeking of refuge. They do not dispute the fact that the opening supplication is for the whole prayer. It is sufficient to seek refuge only once, as it is apparent from the authentic hadith.” Then he mentions the preceding hadith of Abu Hurairah, and says, “It is sufficient just to make one opening supplication, since there is no real break between the recital of the prayer. The only thing that is between them is the remembrance of Allah, and so on. Therefore, it will be considered as one recital. Ash Shaukani has the final word, and says, ‘It is best just to do what has been related from the Sunnah, and that is to seek refuge in the first rak’ah only.”