Yankuba Darboe, who is also the commissioner general of the Gambia Revenue Authority (GRA), said one of his principal responsibilities is to ensure that WATAF achieves its objectives in the next two years.

He said this development was due to the positive track record that GRA has been registering in terms of revenue mobilisation and the effective tax system put in place in The Gambia.

Speaking to The Point, Mr. Darboe said the main responsibility of WATAF chairperson is to ensure attainment of the WATAF objectives; such as encouraging strong collaboration and sharing of information amongst all ECOWAS Member States    towards improving the quality of tax administration.  He added that he would also ensure that all West African Member States speak with one voice on tax policy and administration matters at African Tax Administration Forum (ATAF) and other international tax organisations.

Among the responsibilities of WATAF chairperson, he is to work towards ensuring that the needs and experiences of the West African Members States are reflected in decision making by tax administration bodies at international and multilateral levels.

According to the GRA boss, a part of his responsibility is to ensure that member states work with ECOWAS to have a structure dedicated to taxation under the auspices of the ECOWAS Secretariat.

“I will ensure that all objectives of WATAF as I have earlier stated will be achieved and much more reform initiatives successfully implemented to make the sub-region a centre of excellence in tax administration,” Mr. Darboe said.

According to him, it provides the platform to encourage strong collaboration amongst all ECOWS Member States towards the improvement of the quality of revenue administration in the respective states.

Dilating on his recent election as chairperson of WATAF, he said it would give The Gambia the opportunity to be more exposed to international good practices in tax administration “because WATAF will be represented by the chairperson and the executive secretary in all tax fora worldwide.”

“It will also give chance for networking with other tax administrations, development and donor partners.” 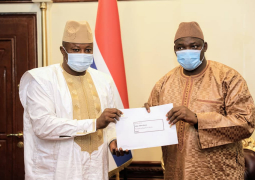