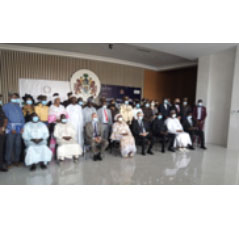 “These are all efforts to show that the government of President Barrow is committed to Security Sector Reform (SSR).”

VP Touray was speaking recently during the launching of an Immigration Project. The project is aimed at strengthening the efficiency and accountability of the Gambia Immigration Department (GID). The launching ceremony was held at the Sir Dawda Kairaba Jawara International Conference Centre. The project was funded by the Swiss government and implemented by Geneva Centre for Security Sector Governance (DCAF).

VP Touray said: “In the aftermath of The Gambia’s December 2016 presidential  election  and  assumption  of the  presidency by Adama  Barrow,  there  was  a clear  need  for  a new people-centered national security policy to address Gambia’s  glaring  security  deficit.”

“There was a  rising popular expectation for a  streamlined, cohesive, participatory, civilian-controlled and transparent National Security  Policy (NSP), for the  “New Gambia,” predicated  on  human-security  and  this  became  a  reality under  Barrow’s  government.”

For the  first  time in  the history  of The Gambia since independence  in 1965, she said, there is a NSP which  spells  out  key  roles, responsibilities,  and mandates  of vital  security  institutions, organs,  agencies, and personnel in order to  reconfigure the security sector to meet evolving national state and human-security needs, challenges, risks and opportunities well into the  next decade of  the twenty-first century.

“The Gambia’s new NSP will avail itself to periodic review and evaluation to reflect changing national, regional and global dynamics. Resulting institutionalised checks and balances to strengthen various  security  service  responsiveness,  will  make  for  a cohesive  policy-strategy  which  at  its  core  is  driven  by Security Sector Reform (SSR) principles in  pursuit  of human and national security.”

“There  has  been  some  tremendous  progress  or  successes registered  in the  SSR,  key amongst them is  the  review of the SIS  Act,  GPF  ACT,  GAF  Act and very soon the GID  Act and all this is possible thanks to the support of DCAF.”

Retired Col. Momodou Badjie, said DCAF has been around and supporting the country since the beginning of the country’s security sector reforms in 2017.

Seedy Touray, director general of The Gambia Immigration Department (GID), said: “This important programme is a breakthrough between the DECAF and the GID. We are gathered here today to witness the DECAF project to support the GID on key components among which is policy regulations, internal oversight and leadership and management development,” he said, adding that his department is fully committed to this programme.

He maintained that the GID is in compliance with the SSR process and implementation of the country’s National Development Plans. “We have developed and aligned our ten goals reforms agenda into our five years strategic plan 2019 to 2024 which again encompasses key areas identified by the DECAF.”

For his part, Vincenzo Mascioli, director for International Affairs, State Secretariat for Migration, Switzerland, said: “Three principles are essential to our operation: trust, reliability and the spirit of partnership. What do we mean by partnership? Partnership to us does not mean that we are not here to quickly solve your problems and then leave again, no. Partnership to us means we look at our cooperation from a long-term perspective.”

“It is in that sense, Switzerland might be able to support The Gambian path of a young democracy by supporting you in terms of building and developing your instructions. That’s why Switzerland is here today launching this important project being implemented by DCAF,” he said, adding that the perspective to the young people is key to any development.

“We are about to launch another important project where young Gambians in the tourism sector will be given an opportunity to be trained in a high quality institution in Nairobi. Furthermore, we are about to start another project of reintegration.”

The minister for Agriculture Dr. Demba Sabally has strongly paised Global GAFSP, the World Bank and the African Development Bank for financing the joined Agricultural projects with a total of US$56 million grant. 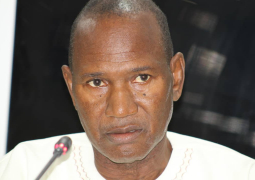