The validation process was initiated by the university and championed by the school of Arts and Sciences as linguistic expects in local languages demonstrated the value of local languages in the educational system as independence.

Speaking at the ceremony, the vice chancellor of the UTG, Professor Faqir Mahammad Anjum, said in national rehabilitation of cultures and languages, there is a need to talk about the importance of languages and culture in the economic and personal development of people and its country.

Prof. Anjum emphasised that it is only through the usage of Gambian languages that will ensure equality and democratic participation of the people in the development of the country.

He pointed out that the usage of English language as the country’s official language is the losing ground in both educational system and the poor performance of the pupils and students are largely associated with the lack of understanding of the language used in classrooms as a medium of instruction.
Vice Chancellor Anjum highlighted that his institution is working on establishing linguistic department which will give students the opportunity to explore Gambian languages in phonology, morphology, syntax and semantics all in a quest for developing the country.

Pierre Gomez, the acting vice chancellor, Academics, described the validation as a turning point in the history of the university as linguistics expect longed for it and as the means of self discovery.

“The university will lead the creation of Mandinka 101, Fula 101 and Wollof 101 etc in the university curriculum and later expand linguistics in the school structures where people can write BA in local language in The Gambia,” he said.

Professor Gomez said that students are taught in various foreign languages in the Gambia but they are not taught in their local languages.

“And yet we call ourselves independent and what type of independence is that, when you cannot even speak your own local language without knowing how your language is.”

He further said that there is a need to decolonise curriculum as well as the mindset of people regarding local languages to empower them to take the lead.

Dr. Abdul Karim Kamara, the dean of School of Arts and Sciences, said that his department has initiated the teaching of local languages in the school for the advancement of education in the country.

He stated the local languages are fading away and if something is not done about it, it is going to have a negative impact on the generation to come.

He noted that the university should take the lead and prevent the local languages from dying, adding that native languages should be preserve before it is too late.

Honorable Sidia Jatta, a linguistics specialist, said that for over centuries, the country has been denied of being independent by the colonial masters because people without language have no identity.

He described language as a fundamental factor that defines who one is as a human being and it is rooted in the culture.
Hon Jatta added that there is a need for chain of liberation, and the linguistics means will pave the way for development. 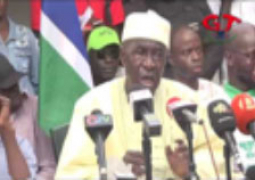