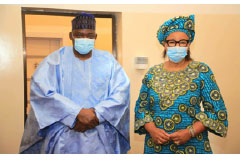 Hon. Scotland is in Banjul as head of the Commonwealth delegation to President Barrow’s second inauguration ceremony held on January 19th.

The Commonwealth Secretary-General pledged her Secretariat’s full support to The Gambia. She made the remarks following her audience with President Barrow. Honourable Scotland applauded the conduct of the presidential election which she referred to as free and fair. She commended President Barrow’s inaugural speech for being inclusive of all Gambians. She also praised Gambia’s reengagement with the Commonwealth as a positive move that will benefit the country and its people in many ways.

In another development, Emperor Naruhito of Japan is amongst the latest world leaders to extend a message of well wishes and happiness for H.E President Barrow and the prosperity of the people of the Gambia.

Also, President Barrow received another message of best wishes from His Excellency, Alassane Ouattara President of the Republic of Côte d’Ivoire.

The Gambia Government wishes to inform all Civil Servants that a memo trending on Social Media on purported rescheduling of the new pay and grading scale to 1st January 2023, is grossly false and misleading, designed to cause anxiety and disgust among the population. 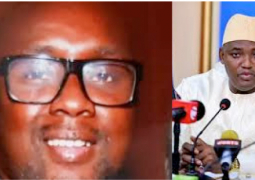