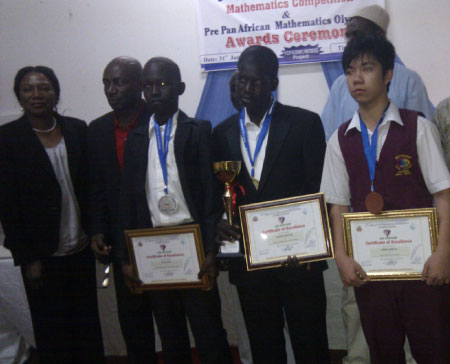 Youth Care Foundation,(YCF) on Thursday presented awards to various winners of the Great Olympiad Mathematics Competition (GOMC) and the pre-Pan African Mathematics Olympiad ( PAMO), at a ceremony held at Region One education office in Kanifing.

The winners of the GOMC in the junior category included Lasana Drammeh of Ndow’s Upper Basic School, who was presented with a gold medal and a cup for taking first position.

Dodou Jobe of SOS Upper Basic School won the silver medal, while Thong Jiong Si of SBEC walked away with the bronze medal.

In the senior category, a female student, Evely I. ladipo of Nusrat Senior School won herself the gold medal and a trophy.

Ebrima L.K Njie from the Gambia Methodist Academy and Hassan Sillah of Gambia Senior School, all of whom were presented with a certificate of accolade were the winners of the silver and bronze medals, respectively.

Meanwhile, Modou Colley of the Gambia Methodist Academy, Hadim Mbye from Nusrat Senior School, Adam Daffeh of Glory Baptist High School and Abdou Karim Jallow of SBEC Int’l School, who emerged winners in the Pre-PAMO will represent the country in the international contest in Abuja, Nigeria later this year.

According to the organisers, the inter-school mathematics competition is an academic contest with the sole objective of serving as a forum to improve the study on the subject in schools, among others.

Speaking at the ceremony, Kolapo Abdul, the Executive Director of YCF, opined that it is a way of stimulating the interest and importance of mathematics in society.

“Mathematics is a subject that needs the attention of the parents and the entire corporate institutions. It should not be left to the teachers, schools and the government,” he revealed.

“The GOMC and the Pre-PAMO is an annual competition that seeks the total support from stakeholders, government and development agencies and partners towards the development of youth. It will add value to their creativities and opportunities to seek careers in science and mathematics-oriented disciplines,” he asserted.

Saidou Jallow, the president of Mathematics Teachers Association, expressed hopes for success from the Gambian representatives in Abuja.

“There is nothing that goes without mathematics. Everything we do we have mathematics in it,” he added.

In a related development, Saidou Jallow, Daniel Mendy, Adama Gibba Jobe and one Mr. Lawrence were awarded with Mathematics Pride Award for their merits in the subject. 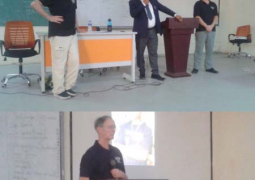