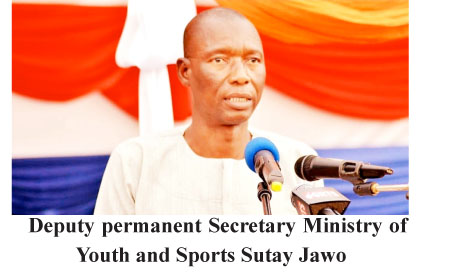 Out of the D21.2 billion approved by the National Assembly as  government budgetfor the year 2020, D113.3 million is for the Ministry of Youth and Sports (MoYS).

But Sutay Jawo, Deputy Permanent Secretary (DPS), MoYS, said the 2020 budget allocated for the youth sector is small compared to other ministries when the country has a youthful population.

Statistics have shown that over 60 percent of Gambia’s populations is youth.

“This clearly shows that the youth sector deserves a bigger budget but MoYS received half-baked cake from the government allocations,” Mr. Jawo said.

“Whenever we present our budget to the Ministry of Finance, we are regarded as a small ministry when that is not the case,” he argued.

The DPS pointed out that the reduction of MoYS 2020 budget would “greatly affect” the implementation of planned youth programmes on irregular migration and skills apprenticeship.

Jawo cautioned that addressing these programmes by the ministry and its satellite institutions would be affected.

He said one of the main challenges of MoYS, in addition to the budget shortfall, is that the allocated funds are hardly released on time.

“The ministry finds it very difficult to receive funds from the Ministry of Finance. Our funds are not disbursed timely,” he lamented.

According to him, in some cases, the ministry’s satellite institutions will send a request to Ministry of Finance, but before the funds are received, the deadline for the planned activities would have elapsed.

“It is always a stumbling block for MoYS and its satellite institutions to get its already approved budget from the Ministry of Finance,” the DPS disclosed.

“This should not be the case. Why do we have to be following-up a request for weeks or months?” he rhetorically asked.

Mr. Jawo noted that there is a need for other ministries that have programmes for youth to merge these programmes.

For example, he said, there are programmes for youth focusing on agriculture through Ministry for Agriculture; so it would have been prudent for the ministries of agriculture and that of youth, to consolidate their youth programmes to maximize resources and outcome in favour of the youth.

As part of the internal consolidation drive, the MoYS Policy and all other Acts governing MoYS’ satellite institutions would be matched to minimize costs.

A youth activist, Saiba T. Susso, said the country is at a crossroad as a result of heavy dependence on grants and loans to develop the economy.

“This is not sustainable,” he said, adding that the impact of all the grants and loans the country is receiving from development partners is hardly felt on the youth, in terms of creating the much needed employment and essential vocational skills.

“Mismanagement of funds through corruption has become the order of the day,” Suso said.

“Considering the grants and loans received by the government, the poverty level in this country should drastically reduce now,” Mr Suso said.

“But the contrary is true; the poverty level is increasing daily.”

Executive Director of the National Youth Council (NYC), Lamin Darboe, believed that the budget allocation for MoYS “is not proportionate at all.

The budget allocation to the youth is not enough and the government needs to do more for the young people”.

The senior NYC official continued: “If our young people do not have opportunity here, there will be more (young) from rural to urban or from urban to other parts of the world for greener pasture.

” Darboe expressed concern with the fact the total amount of funds approved for MoYS and its satellite institutions for 2019 were not disbursed.

“We did not receive the entire funds allocated for the NYC in 2019 and it has been the case throughout,” he lamented.

“Last week (11th December, 2019) all the satellite institutions of MoYS were at the Ministry of Finance requesting for our allocation because we need it to spend on our services but up to the time of this interview, we are yet to receive the money,” he revealed.

Sabally described the youth sector as the “most vulnerable” when it comes to budget allocation.

He cautioned the government to focus on development programmes and projects that could create jobs, particularly for the youth folk.

“If we do not address youth issues, we will continue to witness expulsions like the recent boat tragedy of which over 60 Gambian youth died,” he echoed.

For the economist, the government is not taking youth issues seriously because the youth sector received the least allocation in the 2020 budget.

Being Your Own Worst Enemy