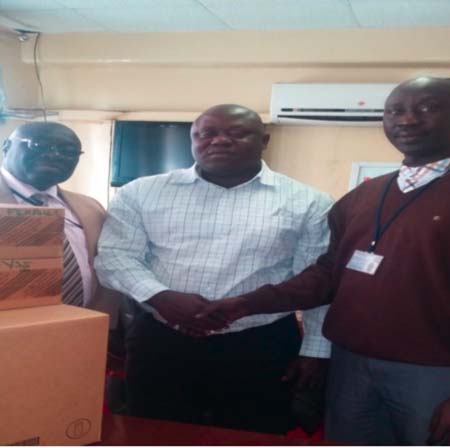 The Chief Executive Officer of the National Youth Service Scheme (NYSS), Emmanuel Mendy, has said that investing in youths means you are investing in national development, as the youths are the cream of the society.

The NYSS CEO was speaking at the presentation of computers to his institution by the Gambia Ports Authority, GPA, on Thursday held at the port premises in Banjul, and witnessed by GPA senior management.

He said the NYSS is very grateful to the GPA for facilitating the working condition at the NYSS.

Mr Mendy expressed the scheme’s appreciation and gratitude to the GPA for creating such an environment.

He noted that NYSS was created by an Act of parliament and they have some cardinal principles that guide the NYSS toward achieving its aims and objectives in terms of their operations.

Therefore, he added, it is the duty of all government agencies and even the private sector to emulate the Gambia Ports Authority.

He said the computers donated to the NYSS would surely be put to good use, and it would help them greatly in terms of records keeping and even office work.

Mr Mendy thanked the senior management of the GPA for their timely intervention, adding that the NYSS is a government agency focusing on youth development and skills training.

“We urged all and sundry to help us to make our working environment more conducive,” Mr Mendy said.

Speaking earlier, Ousman Jabarteh, GPA deputy Managing Director, disclosed that the NYSS wrote to the management of the GPA for help with computers, and this was why they are presenting to them together with computers for the Gambia Immigration Post in Barra.

He said this was not the first time the GPA has been helping relevant government agencies to make their working environment conducive.

He said the NYSS is responsible of helping youths to acquire skills, which would help them in their social development, which skills, he said, are also very important to the GPA.

“We also received the same request from the Gambia Immigration Department in Barra in the North Bank Region (NBR), which we are donating another two computers to them in order to help them in terms of their documentation,” said the deputy GPA MD.

The Gambia Ports Authority has always been partnering with the Gambia security fraternity as part of their corporate responsibilities, Mr. Jobarteh added.

The representative of the Barra Immigration Post underscored the importance of the computers to their work, noting that this would help them greatly in documentation in Barra.

He said Barra is a very busy area in terms of aliens transiting, and getting computers would be very helpful to their work.

OPINION: President Barrow “Or” The 3 years