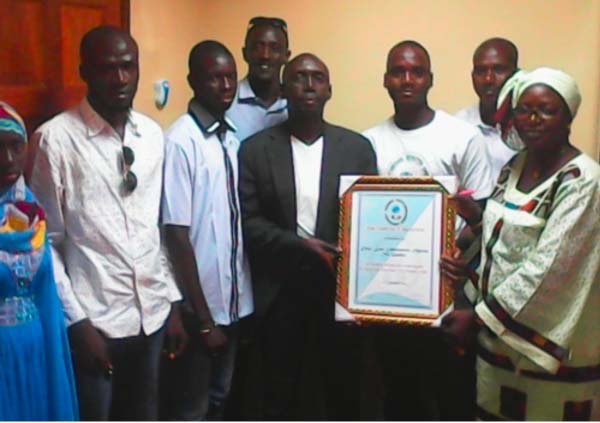 In recognition of their effort in the fight against drug abuse in the country, the Bakindick Youths Association, BYA, recently presented a certificate of appreciation to the National Drug Law Enforcement Agency (NDLEA), at a ceremony held at its headquarters in Pipeline.

“Youths are the backbone and cream of any meaningful development in a particular country, and if the youths venture themselves into drug abuse or trafficking, it is the duty of each and everyone to join the fight to complement the efforts of agency, and this is what exactly my association is doing,” he said.

He said drug abuse had created a lot of insanity in the youth folk, and his association is out to discourage those youths from drug abuse by sensitizing them in their various communities.

“We implore the agency to continue sensitizing the youths on the dangers of drug abuse or trafficking,” he said.

He said his association was established on 25 December 2013, with the sole purpose of promoting the youth agenda, as well as to discourage them from druse abuse or trafficking.

“It is geared toward, among others, to promote and protect the welfare of the village, particularly the youths through education, skills building, gender consciousness, leadership skills and, most importantly, to instill self-esteem and the spirit of unity in youths,” he said.

“We have been challenging our members to do away with the impossible syndrome and be more optimistic, and to say ‘yes we can’ in many ways, such as creating an avenue through which they can share their ideas, awarding prizes to outstanding students, organizing debates and quiz competitions, community services and sports,” he added.

He said plans are under way for his association to organise a two-day workshop to sensitise or discourage the youths from using drugs in the society.

“My sincere thanks go the officers of the agency, who are in the field to patrol, day and night, to discourage drug abuse,” he further stated.

The public relations officer at the agency, ASP Modou Jobe, thanked the association for their efforts in discouraging the use of drugs in their community.

He said the agency is not only responsible to arrest and prosecute, but also empowered by the laws of The Gambia to sensitise the general public about the dangers involved in drug abuse or trafficking.

He said a good number of youths are fully aware of the dangers involved.

“I believe as an agency we are successful in the fight against drug abuse,” he said.

He thanked the Bakindick Youths Association, adding that the agency’s doors are always open when it comes to drug-related offences.

He urged the general public to continue to be vigilant, adding that they would soon embark on a mass sensitisation exercise, and thanked the media fraternity, who are always there for them when they need their services.

“As you all know, most of the members of the association are young boys and girls; so it will be very proper for your association to complement the efforts of the agency,” he said.

He assured all of his office’s support to the association at all times, when the need arises in terms of the fight against illicit drugs.