The Ministry of Youth and Sports yesterday announced the evacuation of a prospective Gambian youngster who is set to leave Banjul on Saturday evening for a treatment on a medical heart condition in the Indian capital of Delhi, Pointsport can reveal.

The 14-year-old, Bubacarr Chatty, who plays his football with Gilkock Academy of Brufut Branch and Steve Biko FC Youth team of Bakau have been evacuated to India in a deal agreed between the Ministry of Youth and Sports and the Indian medical specialists, this paper can confirm.

Kumba Conateh Nam, deputy permanent secretary at the Ministry of Youth and Sports, said she was proud to present an air ticket to one of Gambia's brightest prospects in the country's youth football, Babucarr Chatty, for an overseas treatment.

Conateh, was deputizing the Minister of Youth and Sports, whose deal is understood to have led to the relinquishing of the country's promising starlet who once earned himself a call-up to the Gambia national U-17 team during the 2010 nationwide selection exercise but could not make a breakthrough into the team.

"I am proud to announce on behalf of the Minister of Youth and Sports that the Ministry is presenting an air ticket to Bubacarr Chatty for an overseas medical treatment on his heart," DPS Kumba Conateh said with delight.

"He (Chatty) will be accompanied by Michael Sambou, a medical escort from the Serrekunda Health Centre on Saturday evening," added Mrs Conateh Nam who also used the occasion to commend the efforts of Hon. Sheriff Gomez for facilitating such a magnificent sign or gesture while he was in Delhi, India, for the Commonwealth Games in 2010.

"When the medical report issued by the Royal Victoria Teaching Hospital in Banjul indicated that Bubacarr has developed a medical TB Pericarditi, (heart condition) a year ago, I was fearful that it could cause a big effect on his life but I still kept destiny on God, and thank God we can be hopeful of some steps forward," says Fatou Jawara, mother of the sufferer, said as tears rolled down her eyes while praising the financiers for what she referred to as their magnificent support.

"I have no words to express of how happy and delighted I am since I received the news of such a great support from the Ministry and I thank them for their wholehearted contribution in trying to save my son under such condition," Camara, who was also in attendance during the presentation of the air ticket to his dearest son, told journalists shortly after the presentation was done.

The news came as a colossal reception for the family of Bubacarr Chatty including the management of Steve Biko Football Club in the country's top flight football league, who regarded Chatty as a promising prospect in the club's revitalization process. 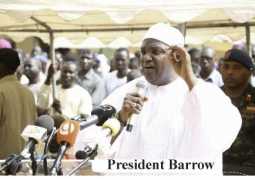