Youssou Ndour was born in Dakar, Senegal, on October 1st, 1959. He began playing and performing music in his early teens and, a few years later, found himself joining The Star Band, one of Senegal's most popular music ensembles. Youssou Ndour went on to form his own group, Etoile de Dakar, and his rise to international superstardom went on from there.

Youssou Ndour's first major album, Immigres, was recorded in 1983 and spoke to the issue of cultural identity for Senegalese people who had immigrated to other countries. Somehow, this record got into the hands of rocker Peter Gabriel, and the timing was right. Gabriel's band Genesis had recently broken up, and he was embarking on a ground-breaking solo career and looking for exciting new collaborators. Youssou Ndour fitted the bill perfectly.

Youssou Ndour on the world stage; touring with Peter Gabriel allowed Youssou Ndour to catch the ears of many other musicians from all genres of music, including Sting, and raised his profile in the international music community. His fame never made him forget his roots, though, and he continued to produce albums that specifically catered for his fellow Senegalese citizens and emigres, alongside more ground-breaking records that fused Western rock and Pop styles with his native mbalax.

The Senegalese international musician has won many awards over the years, and even scored a hit in the United States with his 1994 Seven Seconds, a duet with Neneh Cherry. In 2005, Youssou won a Grammy Award for his album, Egypt, and Rolling Stone Magazine named his 2007 album, Rokku Mi Rokka, as one of the top albums of the year. Youssou Ndour plays mbalax, which is essentially Senegalese pop music. He is primarily a singer and percussionist, and he uses African-Caribbean and Western pop music in his compositions. His musical explorations have influenced nearly every living Senegalese musician, and most modern African musicians outside of Senegal as well.

Youssou Ndour has long been a popular composer for movies that are set in Africa or which feature African immigrants, but he made his big acting debut in the 2007 feature film, Amazing Grace, a movie about the slave trade in the British Empire.

In his youth, Youssou Ndour was a promising soccer player who intended to make a career as an athlete, but after a severely broken leg left him unable to play at his best, he decided to refocus his efforts entirely on music. 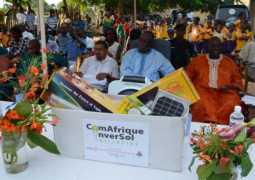 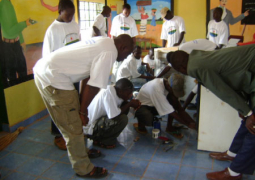