According to a press release sent to Entertainment, Young Jollof Design Association (Teckochi) will organize its maiden Fashion Show today 6th Friday 2010 at Duplex Night Club. The fashion show is the brain-child of five upcoming contemporary Gambian fashion designers: Ya Awa Conateh, Mina Jeng, Ramatoulie Bittaye, Agi Penda, Matty Bah. These ladies would like to take the fashion industry in The Gambia to the global level. They would like to revolutionalize design. Young Jollof Design Association is a profit-making association dedicated to elevating the presence of the youth in the indigenous fashion industry, and creating indigenous, but globally-friendly and relevant designs.

The release further stated that the state-of-the-art fashion show to be held at the famous Duplex Night Club will include the showcasing of three designs from each of the five designers under their respective labels.

The event will be under the auspices of the President of The Gambia Fashion Designers Association, Ndey Awa Khan. "We are happy to see these ladies creating such an association to support Gambian fashion, especially among the youth," said Ms Khan. Ms Khan who reiterated the need to create awareness of The Gambia's talent in the global fashion industry has played a vital role in fashion design in the Gambia, and the world at large. She said Young Jollof Design was launched in June of 2010 to respond to the lack of contemporary Gambian designers. Their theme is "African textiles and worldly contemporary African woman."

Ya Awa Conateh studied fashion design and interior decorating at Leeds College of Art and Design. She is a noted fashion designer in The Gambia and one of those dominant in the fashion scene. As President of Young Jollof Association, she has been in the forefront of pushing youth involvement in the local fashion industry. "We've got a lot of talented youths in the country, and is all about showing our creativity," she declared.

The aim of the Association, according to its president, is to take the Gambia to another level in terms of fashion. She said "Africa is targeted at first, but we are looking globally. Our intention is to do fashion design and invite all designers in the country." Madam Conateh, therefore, thanked for all those who are supporting the association in one way or the other. She also called on the general public to come in their large numbers to attend the show. 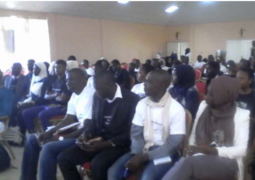